One of the Matatu owners representative said that their sector would like the next government to take back matatu stages within Nakuru Town, after incumbent governor Lee Kinyanjui took them at the outskirts of the town.

In his response, Gachagua told the matatu owners that since the person who kicked them out of town is known, it is time they kick him out of office come August, saying the residents have the solution to the inconveniences caused by Kinyanjui's move. 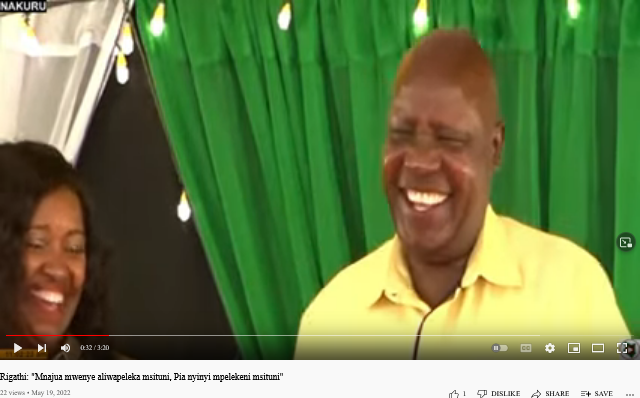 "Mwenye alipeleka hizo magari msituni anajulikana, sasa nyinyi mko na suluhu ya kumpeleke yeye msituni na magari zitarudi town,' Whoever took those vehicles from town to the 'forest' is known, you have the opportunity to take him out of town to the forest and the vehicles will be back in town," said Gachagua as the residents broke in to cheers.

Kinyanjui will be seeking an election in August, and he will be battling it with United Democratic Alliance's Susan Kihika who was attending the economic forum led by Deputy President William Ruto.

Listen to Gachagua's remarks in this VIDEO.

JUST IN: Several Feared Dead After Matatu Heading to Meru From Nairobi Involved in Grisly Accident

Spitting In A Taxi and Littering Will Land You In Jail

Greatest Legacy President Uhuru Kenyatta Is Going to Leave in Kenya After His Retirement.

Just In: Sad Twist as Drunk Cop in Viral Clip Kills Self

Moses Kuria Fires Back At Raila Odinga After Claiming No Elections Without A Manual Register.

Pride of Kenyan Roads: See The Best Bus Companies With Most Beautiful Buses in Kenya