By NewsHouse (self meida writer) | 1 months 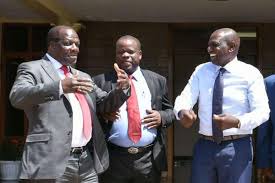 Leaders from the Western region are embroiled in a vicious battle to gain political mileage during President Uhuru Kenyatta's tour that begins on Sunday.

Governors are making efforts to have control of the three-day tour that will see the President launching and restarting several projects across the four counties.

But they are facing strong opposition from MPs who say they are the ones who will pass budgets towards financing of the projects and should, thus, be in charge.

On yet another hand, a faction led by de facto Luhya leaders coalescing around ANC boss Musalia Mudavadi are also pushing for control of the tour.

The group is opposed to the presence of ODM leader Raila Odinga whom they accuse of using the party's allied governors to gain politically from the trip.

Leaders allied to the various formations said today that the tour would only be successful if it was not hijacked and choreographed to campaign for some people and undermine others.

Kakamega Governor Wycliffe Oparanya insisted that the tour was purely developmental and had nothing to do with regional or succession politics.

"We are the leaders on the ground and that is why the President asked us to come up with the projects that needed his attention. There is no politics," he said.

Dr. Oparanya said most of the projects were initiated by county administrations in cooperation with the national government and that is why they were in control.

He however added that it did not mean other leaders had been sidelined.

The sentiments were echoed by his Vihiga counterpart Wilbur Ottichilo who dismissed claims that the governors had deliberately hijacked the itinerary so as to favour them politically.

"I do not understand this whole furore about the President's visit to our region. What our fellow leaders should be working on is what extra projects they should table to the national government during the tour," he said.

Dr. Ottichilo stated that all leaders from the region, including Members of the County assemblies were fully involved in the tour.

But the sentiments were dismissed by several MPs who said they were deliberately being sidelined.

"We are only reading about the trip in the media but we have not been officially informed yet we are the ones who pass budgets to implement the projects to be launched," said Lugari MP Ayub Savula.

He added that they would not be party to the tour if their ANC leader Mudavadi would be sidelined.

"We have information that Raila will be accompanying the Head of State during the tour as a way of trying to revamp his political fortunes in our region which are dead and buried," said the MP.

"He should concentrate on his region because we never see our party leader interfering whenever the President visits them," he added.

But other leaders called for unity amongst them to ensure the tour was successful.

Devolution Cabinet Secretary Eugene Wamalwa said today that Luhyas and other residents of the region should come together so that the projects to be initiated by President Uhuru would succeed.

Wamalwa told a local radio station that they did not expect any drama and confusion during the trip.

There are reports doing rounds that youths were being enlisted to cause chaos during the tour if Raila will be present.

"These projects are regional and national by nature and we are lucky that we are hosting them. The best is for all the leaders to be available and talk with one voice," said the CS.

Raila has become a common enemy of leaders allied to both ANC, Senator Moses Wetang'ula's faction in Ford-Kenya and those allied to UDA led by former Senator Boni Khalwale.

"Musalia is our leader as a party, community and region and he should be the one on the forefront because he represents our aspirations, dreams and ambitions. Any other person can still be present but under Musalia," said businessman Fred Ikana, an ANC insider and aspirant for the Shinyalu parliamentary seat.

There is a battle for supremacy amongst several leaders in the county.

Governors are trying to flex their muscles and become new kingpins to the chagrin of de facto leaders Mudavadi and Wetang'ula.

Dr. Oparanya has been using his position as the Lake Region Economic Bloc to whip governors from Western, Nyanza and parts of the North Rift into stamping their authority in the region.

This has caused bad blood between Oparanya and Mudavadi on one hand and his Bungoma counterpart Wycliffe Wangamati with Wetang'ula on the other.

Uhuru is expected to land in Kakamega on Sunday during which he will hold a meeting with local leaders at the State Lodge.

He will then launch the construction of a Ksh. 100 Million gold refinery in Ikolomani.

He is expected to visit Mumias Sugar Company and announce a major revival programme.

He will also tour Vihiga County where he will commission the construction of a granite factory and issue a charter to the Kaimosi University.

The President will further tour Bungoma to launch the Chwele Open Air market and Matulo Airstrip in Webuye.

He will head to Busia to commission by-pass roads and issue a charter to Alupe University.