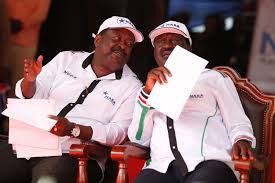 It was evident from earlier on that Amani National Congress leader was was going the hustlers direction after allegedly being betrayed more than once by Orange Democratic Movement leader Raila Odinga. It is now a matter of when and not if for ANC supporters as they seek to explore a new direction in politics.

As ANC supporters were eagerly awaiting for this 'earthquake' announcement, it was clear that Azimio la Umoja supporters had a single eye on this declaration having a little hope that it might have favoured them in one way being that Raila has always enjoyed massive support from the Western region. Even though they hopped, the announcement caused more harm than good to them as Mudavadi clearly stated that he will not work together with Raila Odinga under the Azimio la Umoja umbrella.

Now that Musalia Mudavadi has cleared the doubts and it is now more likely that he will work together with Deputy President's United Democratic Alliance, what next for Raila Odinga and the Azimio la Umoja? How will the declaration affect Raila's influence in Western region? What value will it add to hustlers camp?

It is more than clear that the ODM leader has lost a gem from the Western region and this will somehow dilute his influence in the Area. As much as the area still remains his strong hold, Mudavadi will influence a fraction of voters from this region especially in Vihiga County where he enjoys around 46% of support according to 2013 election results. Raila will have to find friends from Western region to reinstate his support in this area now that Musalia is out of sight.

2. How will the move affect the hustlers camp?

As much as the hustlers camp are the biggest gainers in this ordeal, they now have a new headache of creating a suitable position for Mudavadi. It is clear that they have settled on deputy president as their flag bearer and the running mate might come from the vote rich Mount Kenya region, their new challenge is to create a new position below the running mate position that will leave Mudavadi and his supporters satisfied.