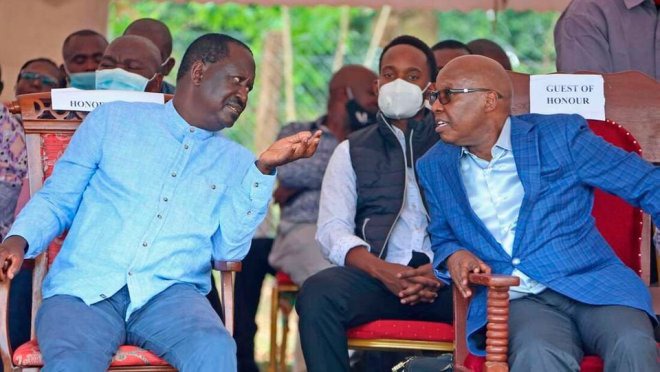 Speaking to journalists in Nairobi over the weekend, Mr. Wanjigi confirmed that he had not been invited in the meeting but maintained that there is still no bad blood between him and Raila Odinga.

“I have not been invited. I do not know what it is because it is not an ODM affair. I hear it is Azimio la Umoja,” he disclosed.

He argued that perhaps him not being invited was informed by the fact that the meeting was not an ODM affair.

Wanjigi however told journalists that he will push on with his quest to win ODM presidential ticket should their party leader Raila Odinga make official intentions to vie.

“Raila Odinga is my good friend and I have a lot of respect for him. I have said it before and I will say it again. He is a hero of the second liberation and for that, we owe this democratic space that we have.

“If he decides and chooses to run then we are competitors, let the best candidate win,” Wanjigi stated.

And speaking about Odinga being handed a direct ticket in ODM Party, the business mogul noted that several other options were available on his table and therefore that should not worry his anyone.

“This will hurt my opponent more than me. There are people who are supporting my candidature and we shall chart a way forward from there.

“I believe in ODM, I like the party very much and I am hopeful that it will stand by the tenets of its Constitution,” Wanjigi stated.

He also indicated his readiness to join forces with other like-minded party leaders to make his journey to Statehouse a success.

'Do rats disturb you at your home?' Here is the best modern Trap Device (VIDEO)

Before you buy any phone, Make sure it has these 5 features if you want the best

An LG OLED TV That Costs Over 10 Million Shillings

7 Keys To Make A Man Miss You Badly.