By Anonymousnews.Com (self media writer) | 13 days ago

Kandara member of parliament, Alice Wahome believes that the former premier's recent political maneuverings in the Mt Kenya region will have little or no impact on raising his popularity among the people. 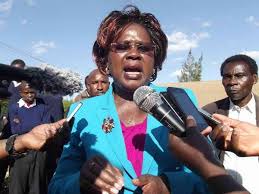 On Tuesday, October 5, the legislator added that the few politicians who have been hosting Odinga in the region are misled and that they have arrived too late to change the political conversation in the region.

She went on to say that, as a result of his several visits to the region, Deputy President William Ruto now has a lot of support from the inhabitants.

"Few people cannot be the voice of the entire region. Residents here already have their mind made up on who to support and vote for in the general elections," she said.

The Ruto-allied lawmaker said that leaders acting as Odinga's point men in the region are out to serve their own interests, claiming that they are people who do business with the government.

"These people should not think that the way they maneuver in the government system is the same way they will convince people to change their stand.

"We have not seen or heard them talking of issues which affect the residents and that basically says they do not represent the interests of the people," she said

She did say, though, that the field is open to all presidential contenders, but that the vote will be the final deciding factor.

"Let them come Raila, we'll bring Ruto, and we'll meet at the voting box to choose the winner. There should be no hurling of stones, and all parties should strive to run peaceful campaigns while promoting their candidate and message "she continued.

Wednesday Football Tips Including GG And Must Win Matches With 58.21 Odds To Place High And Win Big