By OchiengManu (self media writer) | 2 months ago 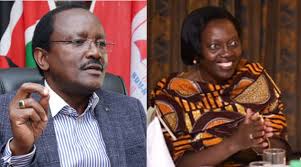 An opinion poll has been conducted by Kenyans.co.ke to alledge who is the most likely politician to Succeed Orange Democratic Movement Party leader Raila Odinga come the 2027 General elections.

Among those who are lined up for the succession politics of Raila is Martha Karua who was his running mate in the just concluded General elections in which Azimio La Umoja lost to Kenya Kwanza Alliance Coalition.

Another politician lined up is Suna East Member of Parliament Junnet Mohammed who was very vital in Azimio La Umoja campaigns before the August 9th General elections.

The opinion poll shows that Kalonzo Musyoka is leading with a popularity of 66 percent while Junnet Mohamed comes second with 18 percent of the votes sample.