Newspapers: Raila: I would rather not be president If This Is What People Want, IEBC Tough Measures

The main headline on the people daily details the tough measures that were announced yesterday by the IEBC and other state agencies to maintain peace during the electioneering period.

The Measures include barring politicians involved in hate speech from contesting in next year's general election.

The judiciary will set up special courts to deal with hate speech cases involving Politicians across the country.

The National Police Service will be deploying additional 5,5000 police officers to assist in maintaining law and order.

Voter registration is nearing homestretch as IEBC Reports low turnout of less than 1 million aggainst the target of over 4 million.

In another story, protests rocked Khartoum following a move by the military to topple the civilian government. 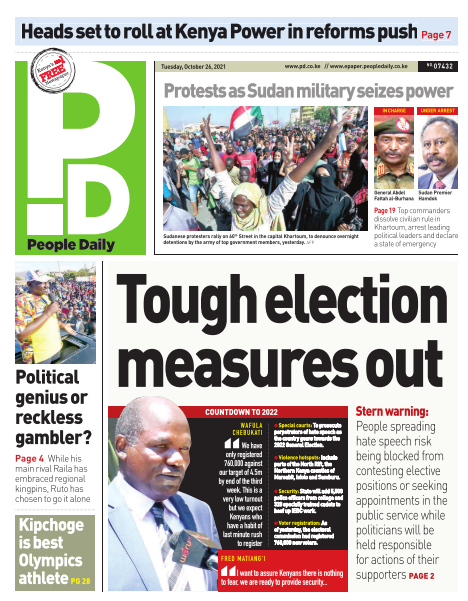 The main headline focuses on Deputy president William Ruto's move to embrace other parties that have refused to fold. Ruto had demanded that all parties that wanted to support his bid to fold up.

His hardline position had caused some of his allies to start drifting away from his movement.

The nation reports that the DP has softened his stand although there are conditions to be observed. There are no Promises on Coalitions and pacts with partners before 2022.

In another story, the case of late Wanjiru who was reportedly killed by a British Soldier in 2012 and her body dumped in a septic tank continues to elicite reactions as more revelations are being made.

It's alleged that there was an elaborate scheme to cover up the crime until the soldier left the country despite the fact that it was a well known fact within the military that she was killed by a soldier who had confessed to a friend.

It now remains to be seen whether the British government will cooperate with local authorities to bring the perpetrator to Justice. On the front page there is a story on Raila's visit to his Backyard County of Kisumu yesterday where he urged the young people to register as voters.

Raila at the same time promised that his priority number one will be to deal with corruption decisively if elected as president.

"President Uhuru Kenyatta said the country loses Sh2 billion daily to corruption and theft. This is unacceptable for taxpayers who are struggling to make a living.

I know the loopholes and where these corruption activities thrive and I will deal with them, " said Odinga.

He said that ever since he declared that he would not entertain corruption in his government if elected president, he has been receiving threatening messages.

“I have received messages and people have been threatening and warning me to go slow on corruption matters lest I lose the support of Kenyans should I contest in the 2022 General Election,” Raila said.

He however said that he rather not become a president of a country where people are corrupt.

“If that is what people want, I would rather not be president instead of leading a country where corruption is beyond 100 percent yet the perpetrators go scot-free,” he said.

He further said that his promise of giving Ksh 6000 stipend to the most vulnerable families will be attainable if given the opportunity to lead next year. 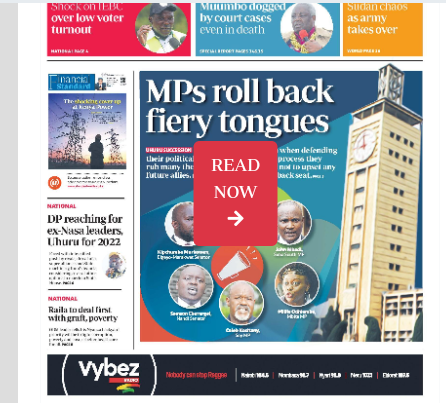 The paper reports of a plan by insurance regulatory authority to have all Bodaboda riders acquire third party insurance covers.

This is meant to ensure that passengers are covered aggainst road accidents just like what happens in passenger service vehicles.

In another story, MPs have questioned treasury's move to convert Ksh 24b loan extended to KQ into equity without consultations. 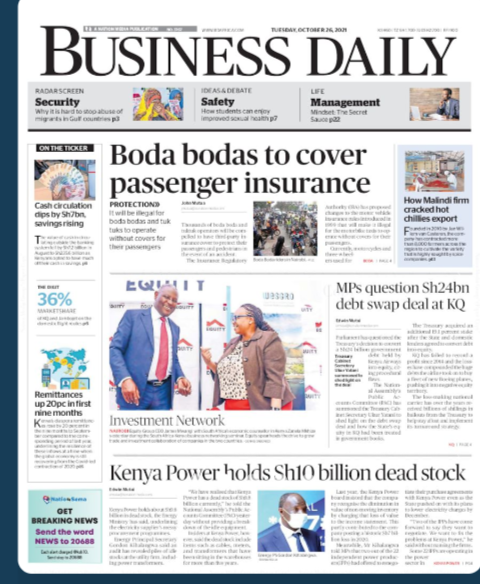 The main story on the front page is on Uhuru backyard's plan to pick the president's successor next Month.

The meeting dubbed Limuru 3 will bring together mount Kenya foundation who are likely to endorse ODM leader Raila Odinga. 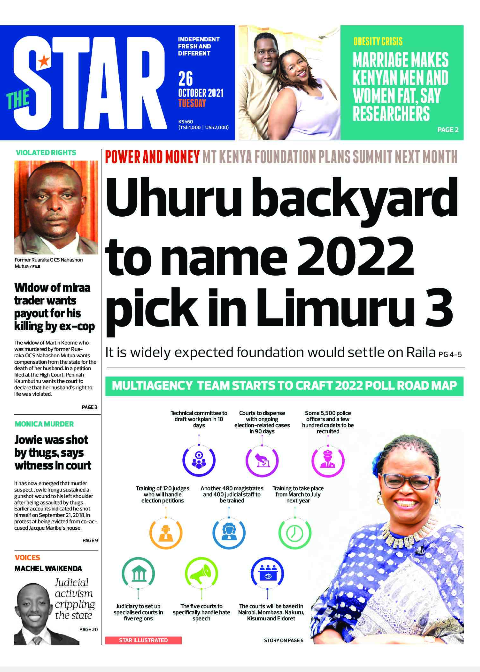