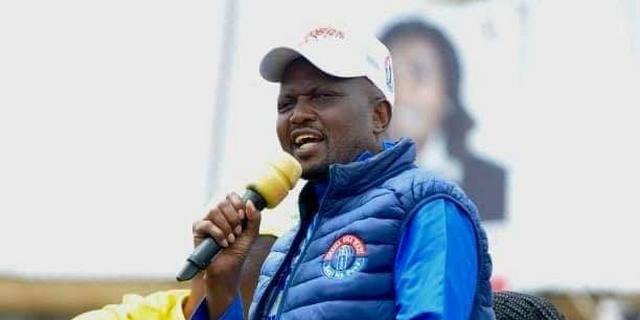 Kiambu County gubernatorial candidate under the Chama Cha Kazi party Moses Kuria on Tuesday took his campaigns to Ruiru as he woos the residents to support his gubernatorial bid in the August 9 polls.

Kuria requested the residents to support his first attempt for the county's top seat, assuring them that he is ready to deliver and solve the issues affecting them should he ascend to power come August.

The Gatundu South member of parliament asked the residents on whether they were ready for the August polls, and they answered affirmatively saying that they will be voting for Deputy President William Ruto as the next president.

While imploring them to turn up in large numbers and early in the morning of August 9 to vote for their preferred leaders, the residents told Kuria that they will 'sleep' at those polling stations and will be among the first to cast their votes for the DP.

"Na pale juu nmapigia nani? 'Who are you voting as the president?" Posed Kuria with 'Ruto' chants filling the air. 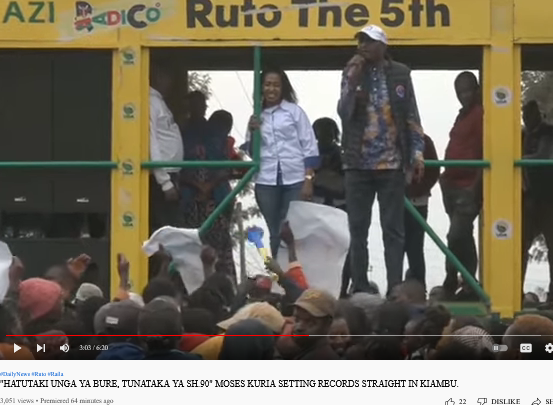 "Mtaamka saa gapi kupigia huyo Ruto? What time will you wake up to vote for Ruto?" He asked as some residents replied, 'saa kumi na mbili, six in the morning,' while others said, 'tutalala uko kwa vituo, we will sleep at the polling stations."

He went on to popularize the hustlers empowerment fund saying that it will uplift many small and medium enterprises, assuring them that should Ruto win the presidency and form the next government, more of such money will be available for youths to start and boost their businesses.

The vocal lawmaker slammed the Azimio La Umoja One Kenya Alliance presidential candidate Raila Odinga, saying that he is to blame for the increased cost of living and more so the prices of maize flour.