"This Will Never Happen Again," Kenyan Speaker Says After The Arrest Of A Powerful Senator

By InstantNewss (self meida writer) | 10 days

Kenyan senate Speaker, honorable Ken Lusaka has opened up about the dramatic arrest of a kenyan Senator who is reported to have been arrested moments veggie before they could begin their Senate meeting which was aimed at discussing the building bridges initiative.

According to the reports given by Senator Wamatangi, he claimed that Meru Senator honorable Mithika Linturi had been arrested by a group of agents from the director of criminal investigations who allegedly came and arrested him within the parliament buildings.

Due to this reason, he called upon the senate Speaker to try and find out what was going on or rather find out the reason behind his arrest because as far as they were concerned, the honorable politician was taken without a notice moments before he could debate on the building bridges initiative.

While reacting to this incident, senate Speaker Ken Lusaka has called upon the director of criminal investigations to make sure they reveal and give reasons why they decided to conduct this kind of arrest in the midst of their session and why they couldn't wait.

He also went ahead and revealed that he was going to make sure he speaks to the ministry of security in order to make sure that this kind of thing never happens again where agents from the director of criminal investigations can just come in and take any politician at their free will. 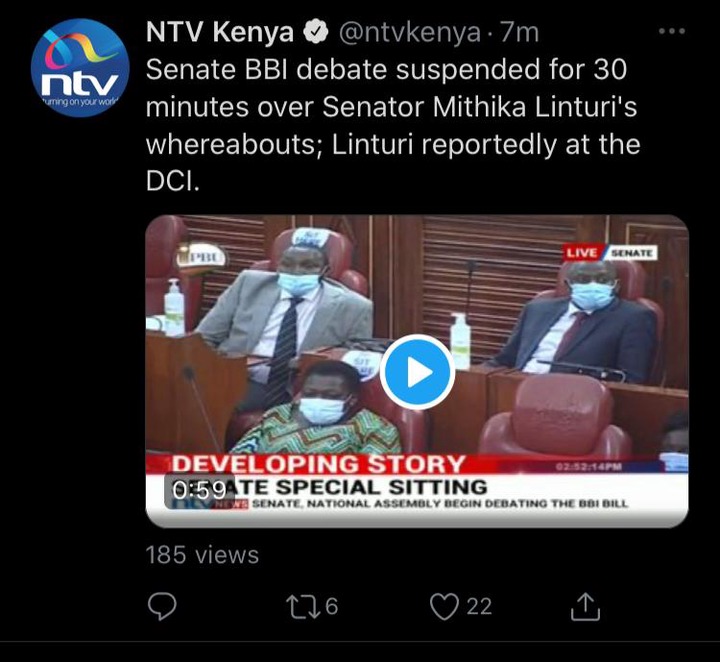