By Kaunda (self media writer) | 5 months ago 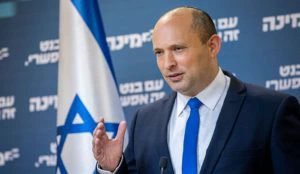 Israel is the only country on Earth whose sovereignty and right to make independent decisions in its own self-interest are constantly eroded. Nobody doubts the validity of Islamic governments conquered through brutal jihad, but the little state of Israel is incessantly and unjustly investigated, despite its undisputed historical claims to its own land. Now, the Palestinians, who have made no secret of their desire to eradicate Israel from the Jordan River to the Mediterranean Sea, are blasting Israel for vetoing Joe Biden's commitment to reopen a US Palestinian consulate in Jerusalem, which would be a provocative act against Israel. " "Israeli

Prime Minister Naftali Bennett stated on Saturday that the mission would have "no room" in Jerusalem." And there is no such thing.

The Biden Administration has demonstrated its commitment to the Palestinian cause by portraying its position to the world as "fairness" in pursuit of a two-state solution. However, the concept of two states is a charade perpetrated by Palestinians, who genuinely seek a one-state solution, which includes the entire destruction of Israel, as stated in their charters. Despite this, Israel remains amenable to compromise in the face of the jihad against it. Israeli Foreign Minister Yair Lapid suggested that the embassy could be relocated to Ramallah's administrative center. "

According to Article 19 of the Palestinian National Charter, the

partition of Palestine in 1947 and the establishment of the state of Israel are both completely illegal, regardless of the passage of time, because they violated the Palestinian people's will and natural right to their homeland, as well as the principles embodied in the United Nations Charter, most notably the right to self-determination.

The Palestinians are actually Ottoman South Syrians with no historic claim to what they refer to as their land, much like the wider Middle East became "their land" through jihad. While the UN (and others) ignore undeniable archaeological evidence establishing the Jewish claim to Israel's territory, including Judea and Samaria, "Palestinians criticize Israeli remarks on the US consulate in Jerusalem," Al Jazeera, November 7, 2021: