By Kleen.Com (self media writer) | 6 months ago

Former MP Kabando Wa Kabando has predicted doom for the former Prime Minister Raila Odinga, who is also the ODM Party Leader. Taking to his Twitter handle on Tuesday night, the former legislator allegedly said that Raila Odinga's Political career might be headed to the dogs if he will not act fast to save it. 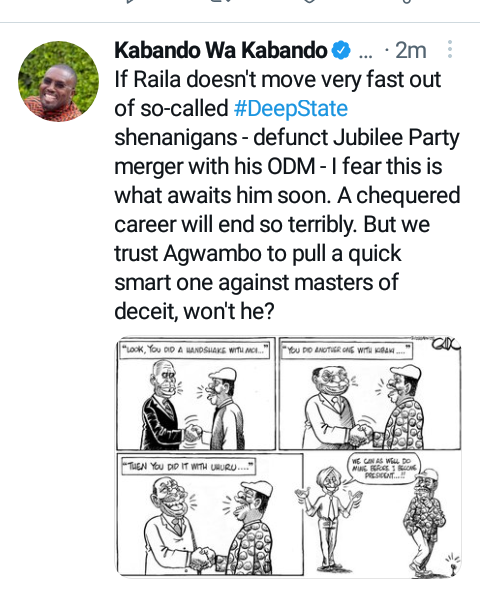 According to the Former Mukurweini MP, the ODM Party Leader downfall might come from working with the dying Jubilee Party and his High expectations on his handshake brother Raila Odinga. According to Kabando Wa Kabado it is high time Raila Odinga dissociate himself from the dysfunctional Jubilee Party and the deep State shenanigans. There have been rumours tgat the Former Prime Minister is a project of the State after working closely with the outgoing President Uhuru Kenyatta. Although the ODM Party Leader has often denied the allegations that he's a project if the Jubilee Government, Kabando Wa advises Raila to save himself from embarrassment. "Stop That Nonsense" Miguna Slams Kalonzo, Urges Him To Do This So As To Defeat Raila In Elections