The Speaker of the National Assembly Moses Wetangula will tomorrow, Thursday, make a ruling on which political formation has the majority in the house between the Azimio La Umoja One Kenya Alliance, and Kenya Kwanza Alliance.

The MPs spent their first session on Tuesday debating on which side has the numbers, with the Azimio side claiming that the Office of the Registrar of Political Parties has confirmed they have the majority, while those in KKA saying that they have defectors from Azimio, and that Azimio is not a parliamentary party or coalition, since no MP was elected under it during the August 9th polls.

Speaking with KTN News, Alengo Usoga MP Samuel Atandi and his counterpart from Saboti Caleb Amisi argued that Wetangula would be making a partisan ruling without following the law if he rules in favour of KKA, considering his meeting with President William Ruto on Wednesday in his impromptu visit to parliament. 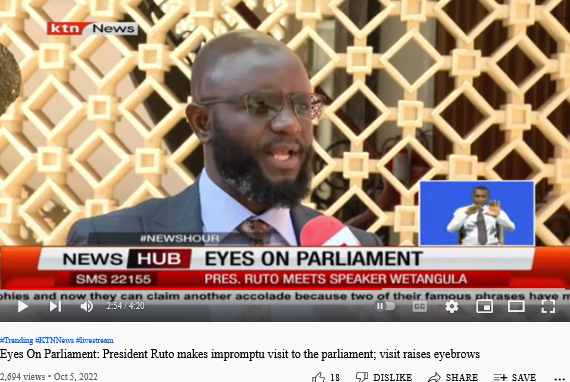 "I have the feeling that the Speaker will make a partisan ruling, and that will be very unfair. His party, Ford Kenya is in KKA, and that coalition sponsored him to the position. It is not visible that he is going to rule against his coalition," said Atandi.

"Wetangula should not allow the 'massacre' of the constitution, and the political parties Act that was passed by the house, and in that Azimio has the majority," said Amisi.