Ford Kenya leader Moses Wetangula has ruled out leaving his Bungoma Senator job to be the Next Speaker of the National Assembly.

This follows reports that this is the agreement in Kenya Kwanza, that if Deputy President William Ruto wins his party will get to pick the Speaker.

This has lately resulted in him being seen as the man set to get the job, which would automatically make him the third most powerful man in Kenya.

But he on Sunday said that he is not interested in being Speaker, and is satisfied with being Senator, hence his decision to defend his seat.

"I don't have to be up there. I'm satisfied where I am," he said on Sunday after submitting his nomination papers to the IEBC offices in Bungoma.

The leader stated that should things go according to plan and his party be handed the position, then it will appoint someone else to hold it and not him. 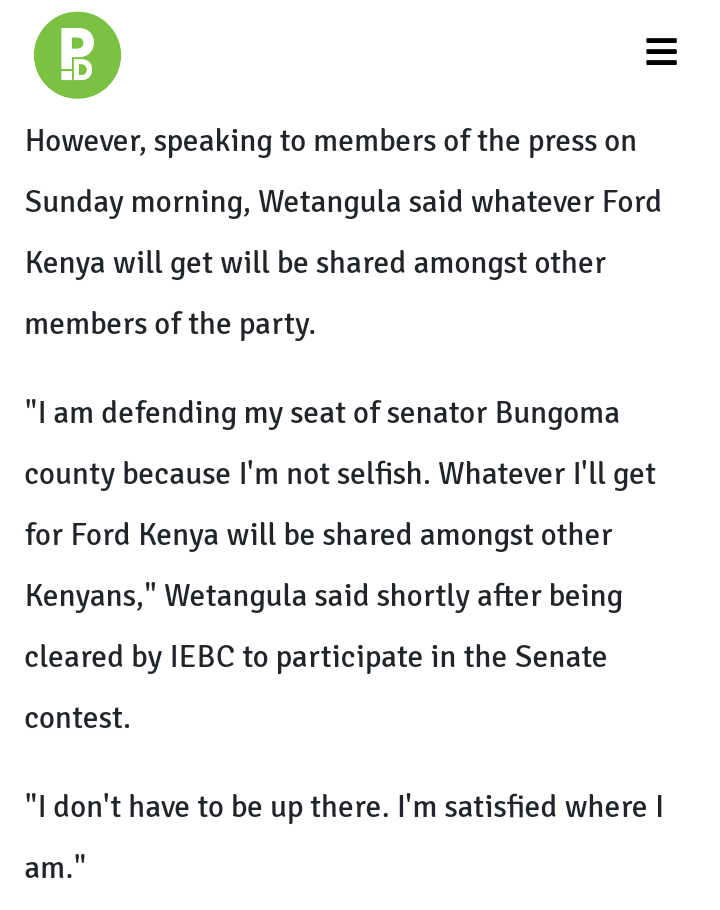 Wetangula added that this should be proof that he is not a selfish leader who wants to take everything allocated to his party and will support someone else.

"I am defending my seat of senator Bungoma county because I'm not selfish. Whatever I'll get for Ford Kenya will be shared amongst other Kenyans," he remarked, as is quoted by People Daily

The two, who are Ruto's pointmen in Western Kenya, are also to reportedly get 30 percent of Ruto's government should Kenya Kwanza secure victory.

But the condition is that they deliver 70 percent of Western to Raila, which Mudavadi has said is doable, stating that they will actually bring 90 percent.

Mudavadi, a former Vice President who also served as Deputy Prime Minister in the Grand Coalition Government, is not vying for any elective post.

Raila Says CS Matiangi Will Be In His Government

What Muturi Said About Martha Karua & Raila In Embu