End of the Road for Tangatanga in Mt Kenya? Uhuru Brings Business to a Standstill in Juja Town 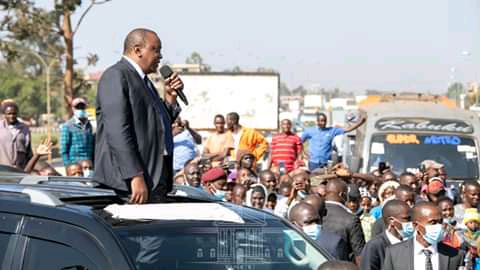 Kingpins is not a new vocabulary in the Kenya politics. The political events in this country are usually controlled by regional and tribal kingpins. These are the people who usually sits at the national table to decide the political path that the country will take.

Various stakeholders have tried their level best to educate the voters on the importance of voting leaders with ideologies other than just being tribal. This is yet to bear fruits as the political elites have been playing the tribal politics to their own advantage. The voting patterns in the country is a clear sign of how sharp our country is ethnically divided.

President Uhuru Kenyatta will be retiring in 2022 after ending his 10 years term of service. The president has been the Mt Kenya kingpin and there has been speculations that he has lost ground in the region. Political analysts have been alluding that deputy president William Ruto has control of the region together with his entire Tangatanga brigade. 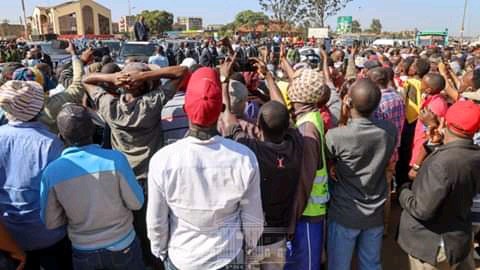 However, things seems to be changing since the country was subjected to BBI politics. The Central Kenya region was at first rebellious to this report but things seems to have changed after president Uhuru held the Sagana meeting.

William Ruto is known to attract huge crowds in this region which has made some translate this to his huge support. However, the president has today, March 2nd, proved his undisputable control of the region.

The commander in chief had attended the burial ceremony of the late Juja MP, Francis Waititu in Juja Kiambu county. The president mourned the MP as a nationalist and a workaholic individual.

After this event, the president went ahead to address the residents in the streets of Juja Town. Mammoth crowd converged to hear from the head of state. The president asked the residents to support the BBI report in the upcoming referendum. He also asked the youths to stop being used by politicians by being bribed with ineffective projects. This statement seems to have been directed to the Tangatanga battalion. 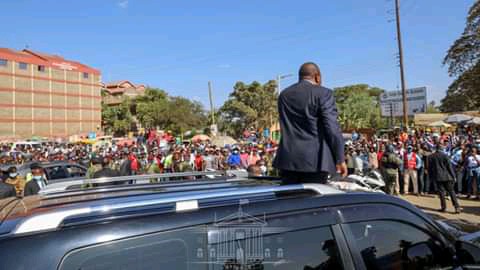 "President Uhuru Kenyatta makes a stopover in Juja town, Kiambu County to acknowledge greetings from residents on his way from the burial ceremony of area MP Francis Munyua Waititu. The President assured Juja residents that he will partner with area leaders in completing development projects started by the departed legislator." Posted Statehouse Kenya.

This action has demonstrated that the president has the full control of the region despite what people have been purporting. His constant attacks to the Tangatanga faction seems to be weakening this team in a daily basis. Various politicians have lately decamped from Tangatanga to Kieleweke. 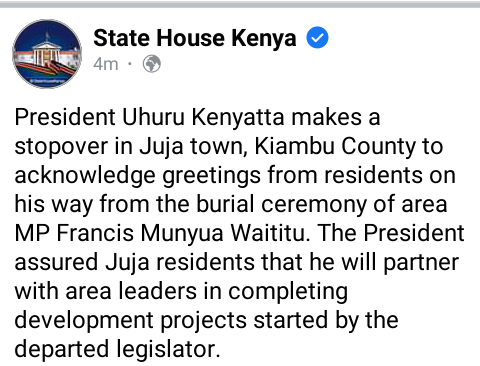