By Psilgich (self media writer) | 10 months ago 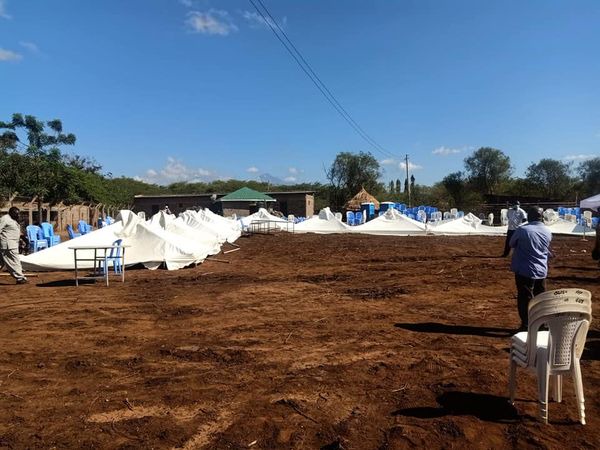 William Ruto’s troubles with Uhuru Kenyatta have gone from bad to worse just a day after the president dared him to resign from government if he was dissatisfied with his leadership.

On Tuesday morning, the DP was preparing to attend the burial of Mahoo Ward MCA Hanel Sagurani.

But before his chopper even took off from the ground, the police are reportedly said to have disrupted the burial arrangements just as the service was getting underway.

Going by the photos doing rounds on social media, tens of tents can be seen lying on the ground in a deserted field that was to host the deputy president.

Mourners were chased as the police used force to enforce covid-19 health protocols.

But many observers believe that the move was a reaction to the DP’s stance against the President even as the country enters into the 2022 campaign period.

DP’s fierce Mt. Kenya ally Ndindi Nyoro took to social media to lament the disruption of the burial of the MCA in Taita Taveta county.

“Police under instructions from above have disrupted and brought down tents at the burial service of Mahoo WARD MCA, the Late Hon Ronald Sagurani in Taita Taveta just because the Deputy President William Ruto was to attend. An insecure regime is fighting in the air both overtly and covertly ostensibly to slow down William Ruto but gratefully, they have NO power over the destiny of any human being. Tumeyazoea haya. Inakaa machungu ya Kiambaa na BBI iko mingi sana.” Nyoro posted on Facebook.

On Monday, it emerged that ODM leader Raila Odinga made phone calls to the Deep State after Machakos Governor Alfred Mutua’s birthday event was threatened to be cancelled over covid-19 fears.

Speaking at the event, Raila, said the Machakos County boss called him after being informed that his party was due for cancelation.

“Alfred called me and told me that he had turned 51 and was celebrating his birthday for the first time, and that he had invited so many friends from all over the world to come…but there was a little hitch taking place against the background of the coronavirus and the establishment was trying to interfere with it, that he was going to breach all the protocols…I spent a big part of last night (Saturday) trying to reach everybody to ensure that this function takes place today (Sunday),” said Raila.

Could this point to a new method of handling the DP?