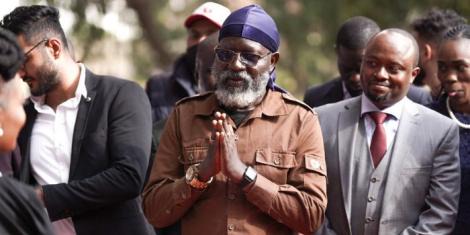 The party in a notice on Tuesday, August 30, announced new officials and the roles that they will be taking up.

In the notice, the faction announced that Yagnik Vinod Ramji will be the Deputy Party leader.

"Following a resolution by Roots Party National Executive Committee, (NEC) in a meeting held at the party head office we confirm the appointment of new party officials," the notice read.

Wajackoyah's estranged running mate Justina Wamae was notably missing from the list. This comes barely a week after Wajackoyah summoned Wamae for a disciplinary hearing.

Wamae was summoned to respond to accusations of making contradictory and malicious statements about the Roots Party.

According to the statement written by Roots Party legal director Washika Wachira, Wamae had misrepresented the party's positions, including claiming that Prof Wajackoyah had endorsed Azimio leader Raila Odinga.

However, Wamae dismissed the summons and stated that she would not respond to pettiness. Later she announced that she was willing to attend the hearing out of her respect for institutions.

In the statement, Wamae questioned whether the entities listed on the notice would sit in the disciplinary committee to interrogate her.

“My expectation is that the copied entities will attend as members of the disciplinary committee,” she stated in a rather sarcastic tone.

When she reported for the disciplinary hearing, Wamae met a heavy police contingent and she was denied entry into the party's offices.

Police manning the gate barred her from entering the headquarters ahead of her disciplinary hearing.

Wamae was spotted consulting her team on the way forward conscious of the fact that her relationship with Wajackoyah had further deteriorated.

Content created and supplied by: Leni254 (via Opera News )