Why Kalonzo Musyoka Should Be Picked as Raila Odinga's Running Mate

By warichard (self media writer) | 1 month ago 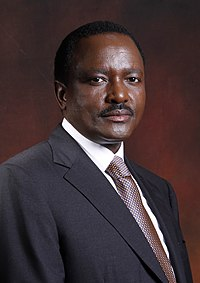 Why Kalonzo Musyoka Should be Picked as Raila Odinga's Running Mate

The goal of this section is to convince readers that Kalonzo Musyoka should be picked as Raila Odinga's running mate for the 2022 Kenyan general election.

Kalonzo Musyoka has a lot of political experience in the Kenyan arena, and his wealth of experience will translate into a rich and fruitful run for the president’s chair.

-Kalonzo has shown excellent leadership qualities in his decisions as an MP, which has made him be seen as a credible leader by many Kenyans

- The two presidential candidates, Raila Odinga and Uhuru Kenyatta need a running mate to balance leadership. Kalonzo Musyoka is the best running mate for Raila Odinga because of his political experience, strong connection with Kenya’s tribal communities, and former position as vice president.

- Kalonzo Musyoka is a Kenyan politician and the Leader of the Wiper Democratic Movement (WDM). He has served as a Member of Parliament for the Mwingi Constituency; Kalonzo is the right person to be Raila's running mate because he has been in limelight for a long time and has the most experience in politics

- A lot of Kenyans speculate that the opposition leader, Raila Odinga, is going to pick Kalonzo Musyoka as his running mate for the upcoming Presidential election. This is because First of all, Kalonzo Musyoka has a history in this field. He also has a good reputation and has led Kenya in its progress before. Kalonzo Musyoka was in charge during Kenya's first democratic government as mp, minister, and later the vice president.

Kalonzo Musyoka has experience in the field of politics; this should not be an issue. Mr. Kalonzo has served in many positions,

- Kalonzo Musyoka is known for his patriotic spirit. He is a senior politician who has served as the third Vice President of Kenya from 2002 to 2013 under the former president Mwai Kibaki.

Kalonzo Musyoka’s leadership skills and Raila Odinga’s popularity are just what Kenya needs for development. They both have a great vision for Kenya, and together will help us build a prosperous country with opportunities for all.

Content created and supplied by: warichard (via Opera News )