"On Wednesday, September 22, Matiang'i met with Qatar Prime Minister Sheikh Khalid Bin Khalifa Bin Abdulaziz Al Thani and delivered a message from Uhuru."The CS acknowledged that the President had sent him on the assignment and noted that Kenya and Qatar would be signing a security deal. 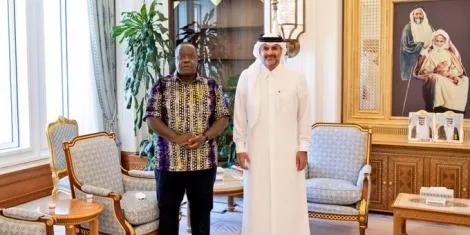 Matiang'i, in a statement, said that the new deal will be anchored on mutual interests between the two countries."It is was my humbling privilege to deliver a special message from H.E. President Kenyatta to H.E Sheikh Khalid Bin Khalifa Bin Abdulaziz Al Thani, the Prime Minister of Qatar.""Our governments are on course to sign a comprehensive security agreement anchored on mutual interests," the statement from the Interior CS read.

Qatar has been a key player in building peace between Kenya and Somalia after the latter announced it had severed ties with the former in December 2020.

But Somalia restored diplomatic ties with Kenya amid the maritime boundary row and pledged respect for sovereignty.

President Mohamed Farmaajo's spokesperson Abdirashid Hashi on May 6, stated that the move was in the interest of the two countries and based on mutual benefit and respect.

Hashi stated that Presidents Farmaajo and Kenyatta were grateful to the Emir of Qatar for their intervention which saw the two solve their diplomatic row.

Reports also emerged that Qatar has a major interest in Italian international Oil giant Eni which was carrying out explorations on some of the blocks in the disputed territory by Somalia and Kenya.

Qatar reportedly offered to broker a deal between the two countries but it never saw the light of day. Kenya withdrew from the case whose verdict will be delivered by the International Court of Justice on October 12, 2021.