Controversial political analyst Mutahi Ngunyi has reacted to Deputy President William Ruto's manifesto unveiling as the second in command leads his Kenya Kwanza Alliance principals in launching the plan they have for the country should they take over the government after the August 9 general elections.

The seasoned analyst who is a vocal supporter of the former Prime Minister Raila Odinga counties to launch scathing attacks aimed at the Deputy President and he has aimed one during the Kasarani event.

The Professor could not resist a thinly veiled dig at the second in command and termed him to be boring in the way he was presenting his manifesto to Kenyans.

Ngunyi has alleged that DP Ruto was only reading a seminar paper written by economist David Ndii who is among the brains behind the bottom-up economic model.

The tyranny of numbers inventor has further castigated those present at the unveiling of the manifesto and pointed a finger at the men in silk suits who in his opinion did not look like hustlers. 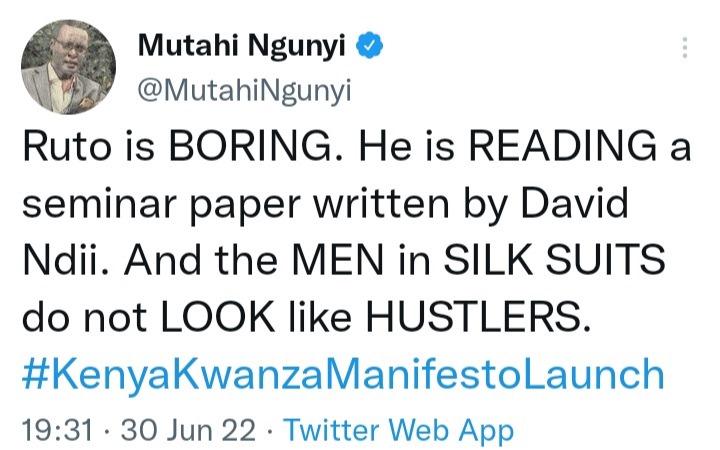