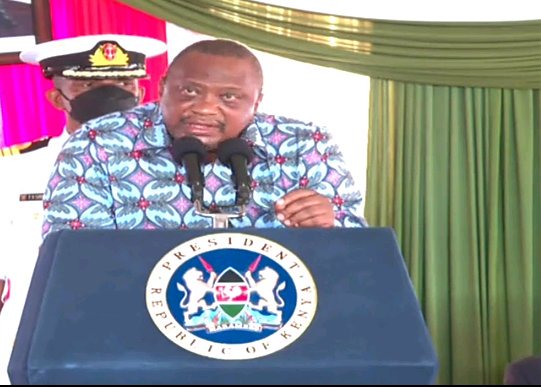 President Uhuru Kenyatta and the Jubilee Party have suffered another setback as key leaders vital to his succession plans defect in droves.

The most recent departures are five governors from Mount Kenya, throwing doubt on the President's grip of succession politics in his backyard ahead of the 2022 elections.

The four governors, who are critical pillars in ODM leader Raila Odinga's ascent of Mt Kenya, claimed they are in talks to forge a broader consensus. The objective is to establish a formidable political vehicle between the Party of National Unity and the Ubuntu People's Forum. Muriithi is the leader of PNU, which was created in 2007 by retiring President Mwai Kibaki.

Kinyanjui, one of the candidates rumored to be Raila's running mate in the August 9, 2022, presidential election, founded the newly formed Ubuntu People's Party.

On Monday, Kinyanjui stated that Mt Kenya will vote for candidates based on substantive concerns, not the quantity of harambees, roadside entertainment, or tokens distributed to individuals.

Kinyanjui said no one should boast of having a stranglehold on the vote-rich region, an apparent reference to Deputy President William Ruto, who has been crisscrossing the region.

"All we ask is that we exercise prudence in pursuing this bloc. Avoid investing excessively, as you will almost certainly regret it. Since multipartyism's inception five years ago, the region has voted with its heart, not its mind," Kinyanjui added. "Interests and alone interests will trump all other considerations."

On Sunday, Nyeri Governor Mutahi Kahiga announced his resignation from the ruling Jubilee party, which came to power in 2013. To be clear, Mr Odinga is unsellable and extremely disliked in Mount Kenya. Allow the truth to be known.

Kahiga has revealed his defection to Ruto's UDA, following in the footsteps of his Kirinyaga counterpart Anne Waiguru, who joined the hustling movement two months ago.

Kahiga has stated that leaders of Mount Kenya will not be compelled to endorse Raila.

He stated that it was tough to "sell" Raila in the region due to the lack of clarity surrounding his development strategy.

"I want to emphasize that Mr Odinga is unmarketable and extremely disliked in Mount Kenya. "Let the truth be told," Kahiga urged during a tour of Nyeri county by DP Ruto on Sunday.

He stated that it was a waste of time and resources to campaign for the ODM leader for the presidency.

"Mr Odinga has not demonstrated why we should support him. We cannot unite behind a leader who offers nothing but bluster and lectures," Kahiga stated.

Governors of Mount Kenya and some local MPs are claimed to have been directed by the President to launch political campaigns to increase Raila's popularity in the region.

However, the current hemorrhage could weaken Uhuru and Raila's attempt to consolidate Mt Kenya. Additionally, it might place the former Prime Minister — the President's handpicked successor — in a dangerous position as he ascends the mountain.

Political observers warn that the governors' choice to join own organisations may serve to further instill fear of a Raila presidency.

However, East Africa Legislative Assembly Member of Parliament Mpuru Aburi stated that the governor of Nyeri's departure from Jubilee had not undermined the ruling party.

"He never contested that seat." "He simply inherited it upon Wahome Gakuru's demise," he explained.

Aburi noted that parties with origins in Mount Kenya will eventually form a coalition with ODM ahead of the 2022 elections.

The EALA legislator, who is affiliated with the National Ordinary People's Empowerment Union party, stated that they will continue to campaign for Raila's candidacy while wearing their clothes.

"Despite our affiliation with other parties, we will back Raila. The best course of action at the moment is to stay in our party, mobilize voters, and then join him closer to election time," he explained.

Aburi noted that Raila's popularity in the Mount Kenya region is continuously increasing, while Ruto's is dwindling.

"Raila is currently climbing Mount Kenya, while the other person is slipping away. I am a member of the National Union for the Empowerment of Ordinary People, but I am singing Raila's melody. "All the ODM leader requires is 30% of Mount Kenya, and we will be there," he added.