Raila's Party Reveals Why They Are Still Withholding Wetangula's Money

Following the situation of misunderstanding among the former NASA chiefs, Raila Odinga, Musalia Mudavadi, Moses Wetangula and Stephen Kalonzo Musyoka, the chiefs in a disclosed agreement decided to quit the coalition, leaving Raila's ODM as the only sure party that was still interested in belonging to the coalition. 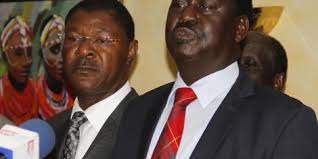 In an interview, the secretary general of ODM party, Edwin Sifuna revealed that Wetangula's money was not remitted as it was required, despite refunding Kalonzo and Mudavadi.

When asked why ODM was still withholding FORD-KENYA's money, Sifuna explained making it clear that the amount being kept for Wetangula's party is Ks. 36 million which was not remitted due to the respect of the Court's decision that prevented the refund process to avoid financing the civil war in Ford-Kenya, the war between Wetangula's group and Wamunyinyi's.

The war between Wetangula and his party members begun when Wetangula was accused of gross misconduct, the accusation that led to an attempted ouster of Wetangula from the party in 2020.