By Mzalendo (self media writer) | 5 months ago 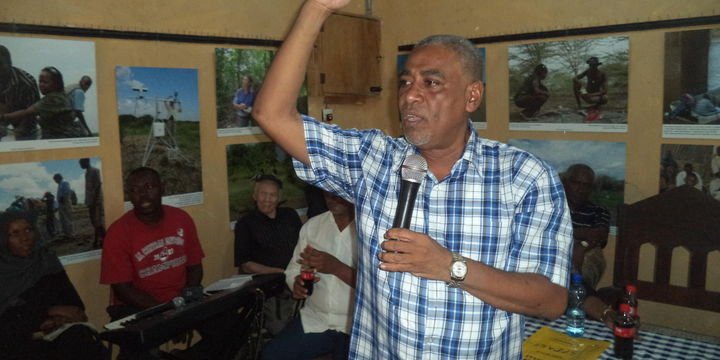 Former Lamu East MP and former Lamu County Assembly Speaker, Mohamed Hashim Salim. Mr Hashim says doors are open for any young politician willing to get advice from him to enable them maneuver in the 2022 elections.

“They think they have it but they don’t. Let them look for us if they intend to succeed and stay relevant for long in this game".

Mr Hashim said today’s political leaders in Lamu do not participate in debates in Parliament.The politician, who served as Lamu East MP between 1997 and 2002 and as Lamu County Assembly Speaker between 2013 and 2017, challenged elected leaders to act as real representatives of their people in Parliament.

“As a senior politician in Lamu, my door is open (to) all those in leadership and the ones seeking political positions in Lamu,” he said, adding that leadership is about sacrifice, serving and having your peoples’ interests at heart.

Famau Ahmed Famau,73, who served as Faza ward councillor between 1968 and 2012, said current political leaders have no concern for their constituents and are only interested in fulfilling their selfish ambitions at the expense of development.

“They’re driven by selfishness and greed and don’t even want advice from us, the elders and veterans in the political field. They think they have it but they don’t,” he said.

Former nominated councillor Sharifa Abubakar, 51, said the selfish interests of the current political class has stifled development not only in Lamu but across the country.

Ms Abubakar, who was in politics for over 15 years, said the unwillingness of current politicians to seek advice from their political elders has generally resulted in bad leadership and disunity.

“Our young leaders need to engage us on matters of politics and leadership. That way, they will be able to serve mwananchi diligently,” she said.

Francis Njeru Chege, 69, who served as Mpeketoni and Hongwe wards councillor between 1979 and 2013 expressed disappointment that youthful politicians were unwilling to involve elders and political veterans.

“During our tenure as politicians, we served our people diligently. We were more than selfless and that’s why we lasted for a long time in politics,” Mr Chege said.

Mohamed Yahya Shamuty, 63, who served as councillor for Hindi ward in Lamu West between 1988 and 2001, said their tenure and leadership were all about sacrifice unlike with some leaders today.

“My first salary as councillor was Sh1,200 only. But we had to put all our interests aside and work for mwananchi. Remember, it was single-party politics and we had to work so that we remained in leadership,” he said.

“Today, people are getting hefty salaries but still don’t care about their people. That’s why they don’t stay long in politics, unlike during our times.”

To curb bad leadership, he said, the council had formed a special committee to vet eligible candidates to run for various leadership and political positions in the region as the 2022 General Election draws near.

The committee, he said, will recommend to locals who to vote for among candidates who declare their interest in a given political office.

“We have formed a committee called Jukwaa la Jamii ya Lamu, whose objective is to ensure the county gets worthy leaders with the interests of the region at heart,” he said.

“We want to ensure those intending to vie for any seat first pass through this committee for blessings. Our intention is to have aspirants with prospects of better leadership once elected into office.”

Lamu elders are an important element of the county’s politics, as they are always considered as opinion shapers, including endorsing eligible candidates to run for various leadership and political positions.

Content created and supplied by: Mzalendo (via Opera News )

Red flags that you should notice in your relationship