The August General Elections has come and gone with the tallying of the results ongoing in the many constituencies across the country where the winners are being declared by the minute.

The elections have been termed as successful, free and fair by the observers with most of the opponents conceding defeat early than usual unlike in past elections.

However, some politicians have found it hard to accept the results and thus have opted to take the high road and will be launching cases with the Judiciary real soon.

Gladys Wanga of the Orange Democratic Movement was declared the winner in the Homa Bay County Elections where she beat Evans Kidero who was running as an independent candidate.

Gladys Wanga was handed the Orange Democratic Movement party ticket amidst squabbles from many sections of the ODM party earlier on this year.

After her announcement as the next Governor of Homabay County, Gladys Wanga was on celebratory mood and was seen with thousands of her supporters with vehicles snaking for miles.

Gladys Wanga is the first female Governor to be elected in Nyanza as per the reports that we have with us this afternoon.

Dr. Evans Kidero, who was vying alongside Gladys Wanga, has said that the process was marred by irregularities and will be seeking redress soon.

Evans Kidero has disputed the results in an election where he came second with a whopping 154,182 votes against the winner, Gladys Wanga who polled 244,559 of the total votes cast.

It is unclear as to how Dr. Evans Kidero will go about this but we await to see and will inform you on the same. 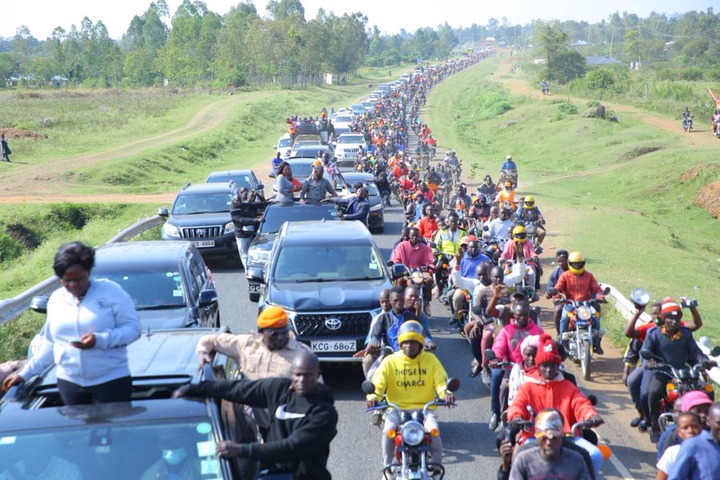 Picture courtesy. Gladys Wanga motorcade after she won the elections.