Pressure continues to mount on Suna East Legislator, Junet Mohamed, to resign over his remarks during an Azimio la Umoja popularization meeting.

During a meeting between presidential aspirant Jimmy Wanjigi and party officials in Embu on Sunday, October 26, some of the Orange Democratic Movement (ODM) party members called for the resignation of the party's director of elections.

Led by former ODM aspirant for Starehe Constituency, Steve Mbogo, the members stated that Junet's remarks were demeaning to the gains that the party had made in the Mt. Kenya region in the recent months. 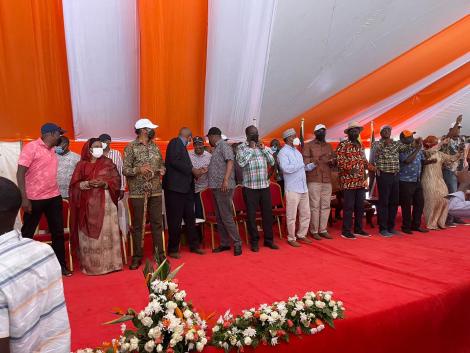 They further called on the party leadership to take action against the legislator claiming that the party had received negative publicity since the remarks.

"Let me tell you, Junet Mohamed, we demand your resignation because people like us work to sell the agenda of the ODM," Mbogo demanded.

Some of the members also claimed that it would be difficult for the officials to sell the candidature of Raila in the region, stating that the remarks were unfortunate.

“The ODM party is for everyone. We need an apology from Junet. Let him not come and ruin our party," an official added.

However, while appearing on a morning show on a local TV station on Monday, October 26, Ugunja legislator, Opiyo Wandayi, who doubles up as the party's secretary of political affairs, defended his counterpart stating the remarks were not held by the party's leadership.

"Before you blow out of proportion the remarks of Junet, you must understand the context in which he was speaking. I was not present at the meeting but I think as somebody who knows the honorable Junet, I think he was just making it as a joke,"

“More importantly we all know that Junet doesn’t speak for ODM. Junet Mohamed is not ODM’s spokesperson or Raila’s spokesperson. The jokes he was making were his personal jokes,” Wandayi stated.

The Ugunja legislator, went ahead to criticize leaders focusing on the remarks stating that it was a non-issue that didn’t deserve the attention it is getting.

“Therefore to jump on them and try to use them as a campaign issue is to sink very low in my view, and we need to avoid that. We can take this debate higher," he remarked.