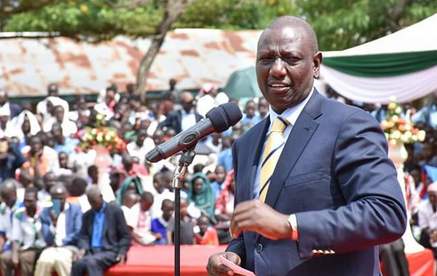 A day after United Democratic Alliance, UDA party leader Deputy President William Ruto was declared president elect by IEBC chair Wafula Chebukati, the party's officials from Bungoma County have listed demands they wish him to meet once he is sworn in.

Speaking to the media, the officials who started by congratulating Ruto for the win, and thanking the residents for supporting UDA and Kenya Kwanza Alliance allied candidates in the August 9th polls, said that the county deserves to benefit from Ruto's government for standing with him.

Speaking in Bungoma Town, the officials called upon Ruto to ensure that he prioritizes the economic posterity of the county by first reviving the Nzoia Sugar Company, as well as the Pan Paper mills in Webuye.

Led by the party's chair for the Bungoma County John Sikuta, Kandunyi coordinator Mulunda Khaoya and youth leader Innocent Sikuku, the leaders urged Ruto to prioritize the people of Bungoma in his cabinet and parastatal appointments. 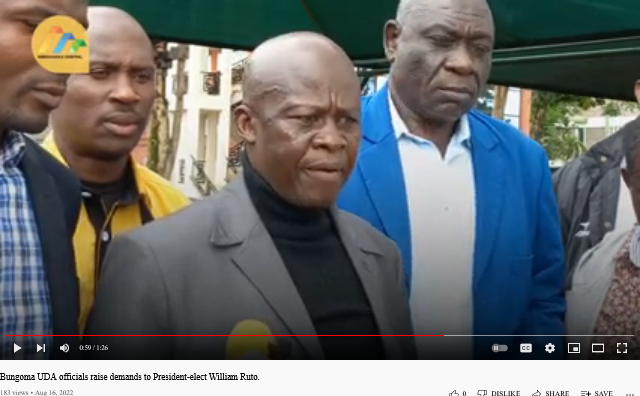 Bungoma was previously being considered a stronghold of the Azimio la Umoja One Kenya Alliance presidential candidate Raila Odinga, but this time round Ruto garnered more votes compared to Raila, a move that has been attributed to the efforts and mobilization of the incumbent senator and Ford Kenya party leader Moses Wetangula.

A good number of the candidates who were eyeing the seat against the KKA wave in Bungoma were sent home, as the top three seats Governor, Senator and Woman Rep went to Ford Kenya.

The remarks by the officials comes at a time when Raila has rejected the results of the presidential race, and has affirmed that he will be seeking the intervention of the Supreme Court, after IEBC announced that he garnered 6.9 million votes against Ruto's 7.1 million votes.