Andrew Sunkuli, has spoken out about what the party leader told them before he departed the country.

By Timtim (self media writer) | 4 months ago

Andrew Sunkuli has finally spoken out about Kalonzo and Raila's feud. Before he departed the country, Kalonzo warned him not to say anything negative about Odinga. The running mate of Wiper Party Leader Kalonzo Musioka has spoken out about what the party leader informed them before he departed the country. This was brought up by Sunkuli on a local television station.

Sunkuli said that he was too preoccupied with his senatorial campaign and Raila Amolo Odinga's role as President of the party's structure, Wiper, to be aware of the day's events and Kalonzo Musioka's substantial issues. He backed out of the race after seeing his posters and hearing Kalonzo mention him as a running buddy. According to Andrew Sunkuli, there is no animosity between Kalonzo and Raila Odinga, the Azimio Presidential Candidate.

He confirmed that Odinga and Kalonzo had a political spat over who would be his running partner, but Sunkuli stated that when Kalonzo returned, he would explain why he took such hasty judgments. Sunkuli goes on to say that he was the last person to see Kalonzo before he left the nation and that he advised everyone to stop criticizing Raila Odinga. 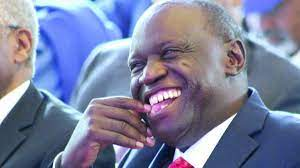 Content created and supplied by: Timtim (via Opera News )