How Moi Suffered During His Time As Kenyatta's Assistant. 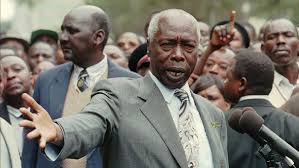 Moi suffered a lot during his time as kenyatta's assistant. Apart from being humiliated by kenyatta personally on some accasions when he paid him a courtesy visit,Moi was a victim of some cliques of kikuyus under a fellow called James Mungai, then heading a special squad called Rift Valley Operations Team otherwise called Ng'oroko. The squad, which was said to be armed with sub-machines guns and other very sophisticated weapons, was formed ostensibly to contain cattle rustling in that part of kenya. The infamous squad was based in Nakuru and was fully funded by the government and to some extent by some stingy -rich Kikuyus who were key players of Gema. These same fellows were behind the move to change the constitution such that the vice -president, Moi then, does not take over as the acting president in case of incapacitation of the incumbent.

Moi's biographer, Andrew Morton, explains in detail how the group came into being and the real assignment. He says Ng'orokos mission was to assassinate "Moi and other high-ranking politicians and civil servants. Under their far - fetched plan they would murder Moi, Njonjo, kibaki and about 300 politicians and civilians before installing their own supporters as a new government. First of all they aimed to lure Moi and fourteen other key ministers to State House Nakuru on the pretext that the president was gravely ill and wished to see them before he died. As Moi and his colleagues gathered round kenyatta, Ng'oroko askari (soldier), armed with their silenced weapons, would gun them down, later telling the world that they had been forced into this action because the vice -president and other ministers had killed kenyatta as he lay on his sickbed.

The plot never materialized as the General Service Unit was put on the alert incase of any eventuality. Lack was also in the side of Moi and the others earmarked for assassination for kenyatta died in Mombasa, not Nakuru.

Morton abserves about kenyatta's death:"In the days before his death,his confident and adviser.Mbiyu Koinange, had constantly begged the president to be given leave to travel to Nairobi to attend two meetings. Late in the evening of 21st August, Kenyatta relented, much to Koinange's relief. Hours later at 3.30 in the morning of 22 August 1978,the first president of the republic of kenya died of heart attack.By then, Koinange, the man who had tried so desperately to prevent Moi from becoming president, was hundreds of miles away. While he slept, power slipped irretrievably from his grasp."