How Former Councillor Ended Up Becoming Ruto's Most Trusted Ally

By LarryKatana (self meida writer) | 7 days 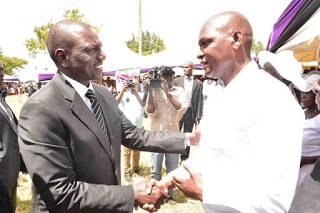 To many, the political rise of Deputy President William Ruto would not have been possible were it not for his trusted Personal Assistant Farouk Kibet.

So powerful is Kibet that even Ruto's own close allies develop cold feet whenever that name is mentioned.

The relationship between Ruto and Kibet goes back to the 1990s when the two were both making entry into politics.

As a youth leader and KANU activist in Eldoret, Kibet was a staunch supporter of the then powerful Eldoret North MP Reuben Chesire.

In 1997, Ruto and Kibet came face to face as the country's future Deputy President launched his bid to unseat Chesire.

It was then that the love between Ruto and Kibet was brewed under very unique circumstances.

In 2002, Farouk crossed to Ruto's camp and was very instrumental in his re-election bid. And it was there that their relationship was cemented.

He was nominated to the Wareng County Council as a Councillor courtesy of Ruto and briefly served as Eldoret Mayor. And the rest is history.

Today, Kibet is right at the centre of Ruto's political activities. He is said to be controlling the DP's diary.

His political rise has also come with its fair share of controversy. At one point, his name was dragged into the mud as he was accused as being one of those behind the National Youth Service scandal. He denied the allegations.

In the fake military arms tender deal that rocked the DP's office in 2020, Kibet's name was also adversely mentioned. And being one person who cannot take blows while lying, he denied all the allegations.

With 2022 politics gaining momentum, Kibet's diary will no doubt become one of the busiest. After all, he is in-charge of the political activities of the man who could become Kenya's President.

That is Farouk Kibet for you. Perhaps, he is one of the wonders of Kenyan politics today.

IEBC Set To Launch The Annual Voter Education In 290 Constituencies For A Period Of 7 Days.

Boy Beats Up His Father to Death, Then Does This