By @PAULO_HustlerTV (self media writer) | 10 months ago As per now presidential race is considered to be a two-horse race between Orange Democratic Movement leader, Raila Odinga and the chief Hustler Campaigner William Ruto ahead of August. Political muscles continues ravaging raising political temperatures as millions of Kenyans are eagerly waiting to see president Uhuru's successor.

Today The second in command William Ruto together with the Kenyan Kwanza Alliance(KKA) team championed Murang'a county to extend their presidential bid ahead of August. William Ruto received a heroic welcome in Uhuru's political backyard after a mammoth crowd turned up for the rally. We can say the Rally was successful because of the numbers that attended the rally. 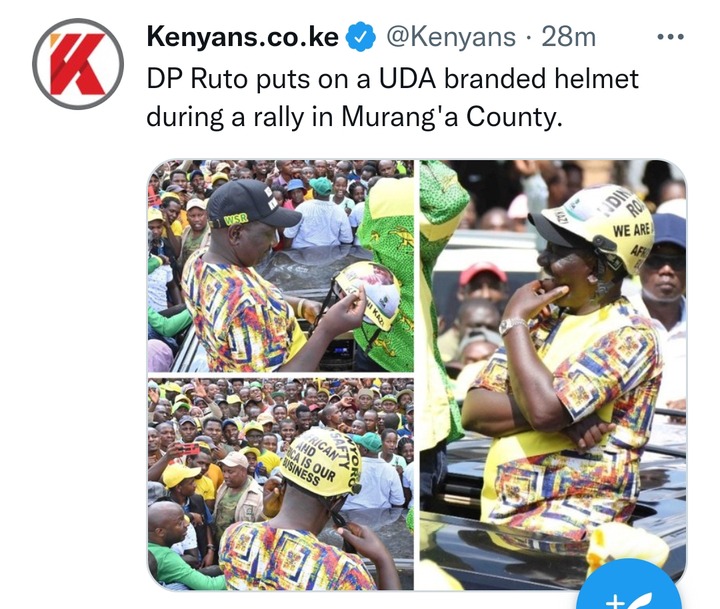 William Ruto after selling his agendas and showing people manifestos he received a branded UDA Helmet with Hustler Nation written on it. He took it a put it on telling people that he belongs to the family of Hustlers. This has lit up the internet causing reactions. Some claims that DP will pretend that he is a good person then after ascending to power he will change completely. People have compared him with Former Ugandan president Idi Amin Dada who behave like him and later become a dictator. UDA diehard supporters have described Ruto as the real Hustler who will cater for their needs since he understands the poor. Below are the reactions