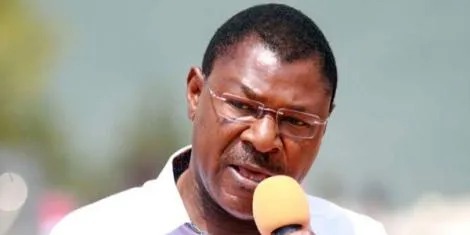 In the latest onslaught, a section of leaders led by Bungoma Governor Wycliffe Wangamati on Monday, October 11, declared that the agreement between Ford Kenya party leader, Wetangula, and OKA principals was illegal.

They argued that Wetangula cannot claim to speak or negotiate on behalf of the party. This comes amid Wetangula's efforts to stamp authority nationwide and within OKA which is expected to choose a 2022 flag-bearer from its four co-principals.

They further accused the senator of denying them the opportunity to elect new leaders. Wangamati, who has constantly been embroiled in public wrangles with Wetangula, invited the latter to the National Delegates Conference (NDC) scheduled for November 6.

"Even after the Secretary General appealed to him to discuss the date of the NDC, he was not interested. August passed without the party holding an NDC," Wafula Wamunyinyi, Kanduyi MP, added.

The faction alleged that Wetangula had postponed the NDC meeting for six years to frustrate his opponents within the party.

Tongaren Member of Parliament Eseli Simiyu, the party's Secretary General, dismissed claims by Wetangula that he (Eseli) was ousted from office and should not represent Ford Kenya's interests.

"He (Wetangula) obtained a faulty court order because the court order restrained the registrar of political parties from dealing with me. It did not stop me from being the Secretary General of Ford Kenya," Simuyu stated.

On Sunday, October 10, Wetangula insisted that Simiyu was suspended for staging a botched coup in the party.

He added that Simuyu's suspension was confirmed by the High Court, and that he was not entitled to transact any business on behalf of the party. According to Wetangula, Millicent Abudho was chosen to replace Eseli in the Secretary General position.

Wetangula argued that only Abudho had the capacity to institute an NDC and that the rest were moles being paid to sabotage the party.