The much anticipated Jubilee party's National Delegates Convention (NDC) overturned the political realm in the country after the DP William Ruto was kicked out from the position of party's deputy leader.

The Jubilee party held its National Delegates Conference in Saturday. The party replaced the Deputy party leader thus throwing away the DP Ruto from his position. To fill his space, four officials were selected. Among the were seasoned politicians such as Jimmy Angwenyi, Naomi Shaban and Peter Mositet.

However, only one person stood out, Kinoti Gatobu. Jubilee installed confidence in the 36 year old to run the party affairs at such a high rank. Kinoti Gatondu hit the political headlines in 2013 after he was elected at the age of 26 as a member of Parliament Buuri Constituency. 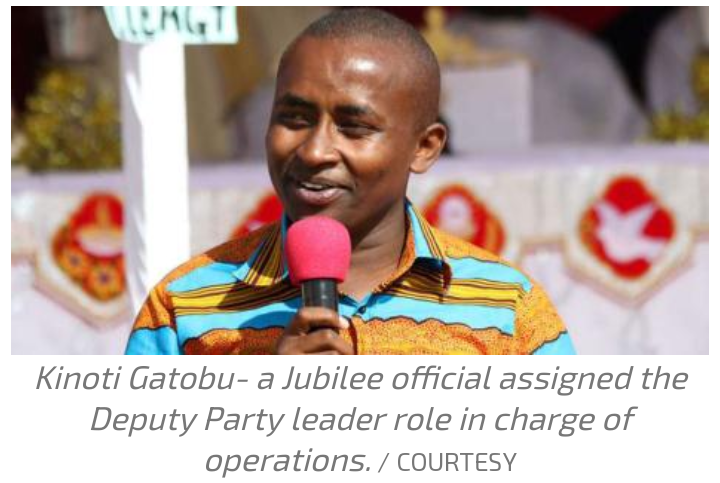 In the second term 2017, he failed to secure his seat back. He initially expressed desires for the gubernatorial seat in Meru. In a quick turn of events, four days to the elections, he declared he will not be in the ballot paper paving way for Kiraitu Murungi.

He defended his decision saying that the President had promised him a state job. One year later, he was made the director at the Presidential's delivery unit.

"We have agreed that he steps down then we will find a job for him in government. He can then get more experience and when Kiraitu and I retire, he and Ruto can continue with the work," Uhuru said at the time.

While being interviewed in a past interview, Kinoti stated that his motivation came from the residents of Buuri where he had benn doing voluntary teaching.

Due to lack of funds he lead a unique kind of campaigns that saw him elected as the MP Buuri. His campaigns were funded by his constituents.

He attended his primary school at Kibirichia Primary from 1993 to 2000. He later joined Nkubu High School in 2001. In 2014, the president attended his wedding in Meru county.

"Tall, Dark, Slim with a Degree' Winnie Odinga Discloses The Qualities of Her Type of Man