Corruption is among the many things that have crippled thee country and brought it to its knees with many calling on the prosecution of leaders who engage in the act.

The government, through the Ethics and Anti Corruption Commision and the Assets Recovery Authority, have been at the top of their priorities to ensure that wealth gotten through ill means is returned to the government.

The United Democratic Alliance party Running Mate for President, Mathira Member of Parliament, Rigathi Gachagua, has been embroiled in some scandals that have seen his immense wealth frozen by the courts.

During the recently concluded Vice Presidential Debate that was held at the Catholic University of Eastern Africa, Gachagua disclosed that he was worth a whopping 800 million shillings.

He went on to disclose that the money frozen by the government was only 200 million shillings and not the purported billions of shillings.

This morning, according to reliable reports that we have received from The Standard Media, Mathira Member of Parliament, Rigathi Gachagua, has been ordered by the Court to surrender 200 million shillings back to the government.

The Mathira Member of Parliament has been ordered by the courts to ensure that he gives back to the government, 200 million shillings which is said to have gotten through ill health.

Judge Esther Maina orders Mathira Member of Parliament Rigathi Gachagua, who is United Democratic Alliance deputy presidential candidate, to surrender 202 million shillings to the government for being proceeds of corruption.

What are your thoughts on this latest reports? Let us know your thoughts and opinions in the comments section below regarding this development from the courts. 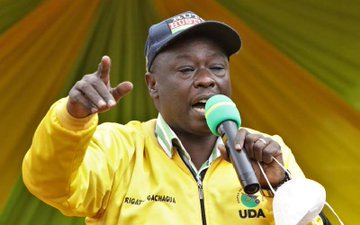 What is the Difference Between England, Britain, and United Kingdom (On A Geographical Map)

Atwoli Resurfaces After Long Time, Reveals The Person he had Lunch With Today