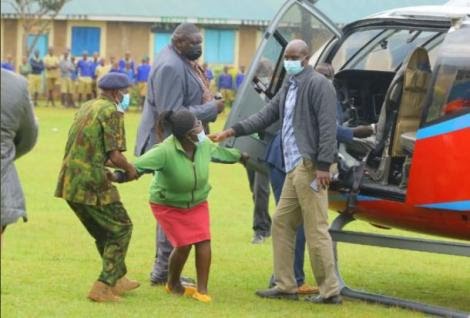 The lady who was whisked by the security personnel of Dr. Fred Matiangi while trying to reach him on has emerged on how she tricked a powerful politician.

According to a reliable source of news reported by K24, Christine Nyakundi, who was whisked by Matiangi's police in Kisii county, has said that she tricked former governor Mike Sonko.

Christine Nyakundi, on April 12, 2018 was seen fighting her way through tough securities to meet former Governor Sonko. After several attempts by police to whisk her away, Sonko noticed her and ordered his security to bring her to him.

Upon meeting Sonko, Nyakundi, who was using sign language, told the former governor that she was in need of medical help. Sonko then was forced to look for an interpreter to help him understand what the woman was communicating with.

According to the interpreter, the lady was seeking medical help. The interpreter revealed that the woman needed the kidney transplant.

"She says she has a medical condition that needs attention, but she can't afford hospital bills." The interpreter told Sonko.

When the woman asked why she lied that she was deaf, she said she could not speak at that time because she overstayed with coldness while waiting for governor Sonko making his respiratory organs to get blocked.

"I was not able to talk at the time, since my lungs had totally blocked because I overstayed in the cold as I waited for the governor." "I lost my voice too," she said.