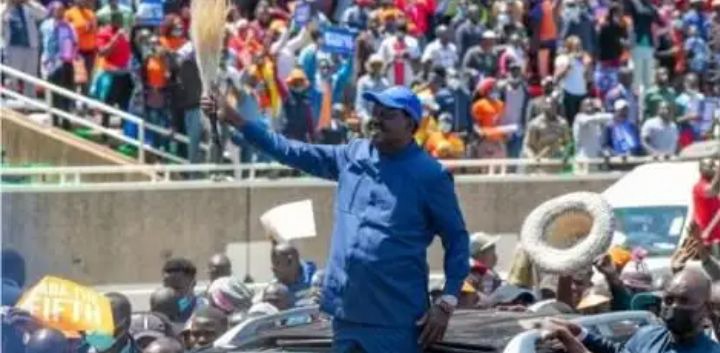 The 2022 political race is already at its peak as the political contenders from all corners of the country Kenya are seen running up and down campaigning hunting votes for their various elective political positions as MCAs, MPs, Senators, Women Reps and Governors ahead of the polls.

The top most political seat race on the other hand is not left behind as it appear to be a two-horse race between the two frontrunners honorable Raila Amollo Odinga of the Azimio La Umoja-One Kenya Alliance and his counterpart the Kenya Kwanza Alliance flag bearer Honorable William Samoei Ruto of the UDA party.

Both Odinga and Deputy Ruto are believed to have popularized their political parties in many parts of the country Kenya making them more popular than other presidential candidates who are also eyeing for the top seat that is set to remain vacant in August.

This is when President Kenyatta who is currently serving his last term shall officially retire upon the completion of his two-terms as the Head of State.

This means if elections were to be held today in Kenya, either Odinga's Azimio La Umoja-One Kenya Alliance or Ruto's Kenya Kwanza Alliance camp would have formed the next government that would have inherited Kenyatta's regime which is set to end in August.

Odinga's Azimio camp reaped big today during their rally in Bungoma County after they were joined by Ruto's key ally honorable Janet Bangabo who declared her support for Odinga's presidential bid in the forthcoming presidency race.

According to the source, Janet who had been supporting Ruto had changed her mind and declared her support for Odinga.

This was a great boost for Odinga's presidential bid especially during this time when the Azimio is seeking nation wide support.

President Who? It is either DP Ruto or Raila As Kenyans cast their votes

11 Move To Court To Bar Ruto's Swearing In Incase Elected

Just in: KIEMs Kit With IEBC's Critical Information Stolen in Marsabit As Chebukati Speaks Out