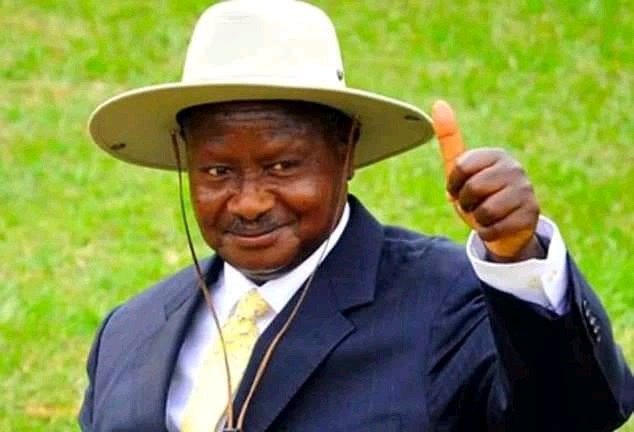 Yoweri Kaguta Museveni was born on 15th September 1944. He is 76 years of age, by the time of publishing this piece.

The President of Uganda was born in Ntungamo, in a typical Banyankole family of cattle herders. He grew up with a brother, Caleb Akandwanaho, popularly known as Salim Saleh, and sister Violet Kajubiri. Museveni means “son of a man of the seventh” in honor of the seventh battalion of the Kings African Rifles. Museveni gets his middle name from his father, Amos Kaguta (RIP)

Education and association at school

Museveni attended Kyamate elementary school, Mbarara High school, and Ntare High school. In 1967, Museveni moved to Tanzania to begin studies at the famous Dar es Salaam University where he studied political science and economics gaining a bachelor’s degree in 1970, and he later became a Marxist, involving himself in radical Pan African politics. While at the university, he formed the University Students African Revolutionary Front activist group and led a student delegation to FRELIMO territory in Portuguese Mozambique, where he received guerilla training

Yoweri Kaguta Museveni is a father, uncle, and grandfather. He refers to most of his supporters as the “bazzukulu” laterally meaning my grandchildren. Janet Museveni, also Minister for Education and Sports is the First lady. They have four children namely Muhoozi Kainerugaba, Natasha Museveni Karugire, Patience Museveni Rwabogo, and Diana Museveni Kamuntu.

Taking a stand in politics and liberation.

During General Amin’s reign, Museveni fled to Tanzania along with the then deposed President Dr. Apollo Milton Obote. During the Uganda Tanzania war, Museveni formed the Front for National Salvation and later the popular National Resistance Army (NRA).

In 1970, Museveni joined the Uganda intelligence service, serving President Dr. Apollo Milton Obote. In 1971 during the military coup led by General Idi Amin, Museveni fled Uganda for Tanzania along with many other figures from within the then deposed government, including former Apollo Milton Obote.

During Idi Amin’s rule, Museveni collaborated with exiled resistance forces in Tanzania while living in exile. He also served as a lecturer in a cooperative college in Moshi, northern Tanzania. In 1973, Museveni shifted his allegiances, leaving most mainstream groups in Opposition of Obote and forming the Front for National Salvation which later “gave birth” to the National Resistance Army (NRA) after the 1980 General elections which he said were rigged by Milton Obote.

Between 1981 and 1986, during the Ugandan bush war, Museveni and his allies moved to the southern rural regions of Uganda and formed the popular resistance army. Together, they organized a rebellion to overthrow the Obote regime. On 6th February 1981, Museveni and his colleagues (resistance forces) attacked an army installation at Kabamba in central Mubende.

On 27th July 1985, Apollo Milton Obote’s government fell due to the military coup led by Tito Okello Lutwa. Museveni and the NRA/M were angered by the power grab, claiming that their efforts had been hijacked by “this boy” Okello and the UNLA. On 20th January 1986, Idi Amin’s supporters, aided by the Zairian (now the Democratic Republic of Kenya) military troops entered Uganda to overthrow Okello. Within two days, the incursion had routed government troops from Kampala. As a result, Museveni was able to lead his faction to victory over the capital city, overthrowing Okello’s government. (“The famous people.com”)