Today's newspapers have reported on the current political developments even as the clock ticks towards next year's general election.

The paper features the ODM leader Raila Odinga's plan to conquer the vote rich Rift valley which is a political bedrock of his nemesis DP William Ruto.

During an interview with various vernacular stations, Raila disclosed his planned meetings with ODM delegates next week in Turkana, Eldoret in Uasin Gishu county and finally meet the south Rift delegates in Nakuru.

Raila said that he still has good plans for the kalenjin people who Supported him in 2007 adding that he is still the Arap Mibei that they coronated at Kapkatet stadium.

He however Ruled out working with Ruto in 2022 saying that Ruto has already decided to work alone as he seeks to have his first stab at the presidency.

Raila defended the Mau evictions although it costed him politically. He said that the decision was passed by cabinet and has indeed helped restore the water tower.

In another story, counties in Western and Nyanza have been warned of a possible fifth wave of Covid-19 pandemic.

The ministry of health officials blame this on the slow uptake of vaccines among the counties such as Kakamega.

Still on Matters health, the world health organisation (WHO) has Endorsed the use of a malaria vaccine. The vaccine will be used on children with moderate to high malaria transmission rate. 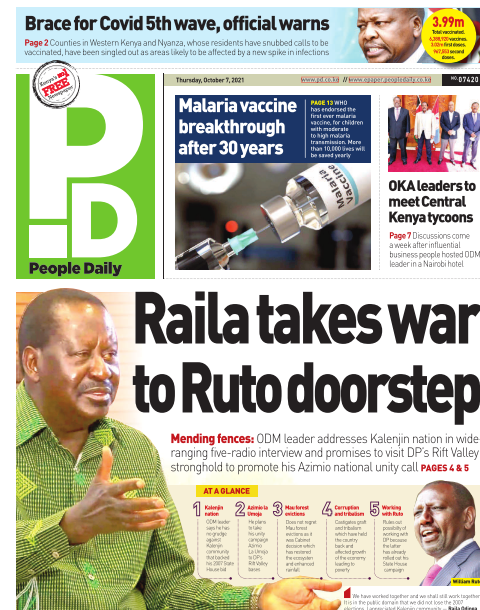 The swahili publication's headline features a story where the ODM leader Raila Odinga had to defend his Handshake brother president uhuru kenyatta over Pandora Papers leaks.

Speaking to kalenjin radio stations, Raila said that it's not wrong to have an offshore account so long as one doesn't use it to launder money.

He added that president Uhuru kenyatta has already stated that he will shed more light on the Wealth his family allegedly holds in the foreign accounts.

Raila however explained that he doesn't have any offshore account and that all his Wealth is kept locally.

He further revealed how at one time while Serving as a state Office some rich businessmen tried to lure him into operating such accounts to avail.

In another story, it was justice at last for a primary school Pupil when her tormentor got sentenced for 20 years having been found guilty of defiling the minor repeatedly.

Finally, KNUT and KUPPET top officials are under pressure to resign for betraying teachers.

Teachers feel abandoned by the unions which they accuse of going to bed with the teachers Service Commission to torment them.

The rollout of TPD refresher courses whereby teachers will be required to undertake for certification is the latest bone of Contention between the tutors and their employer. 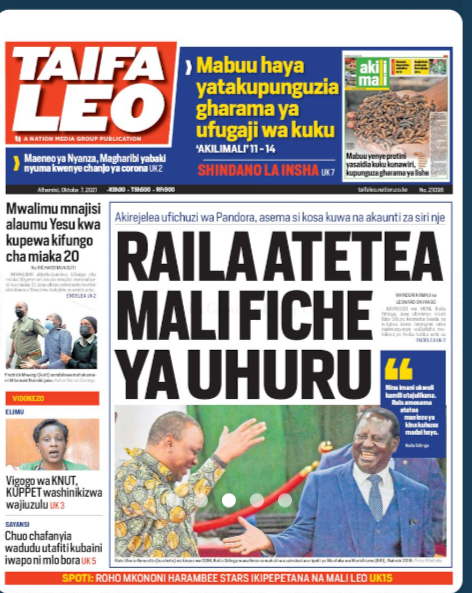 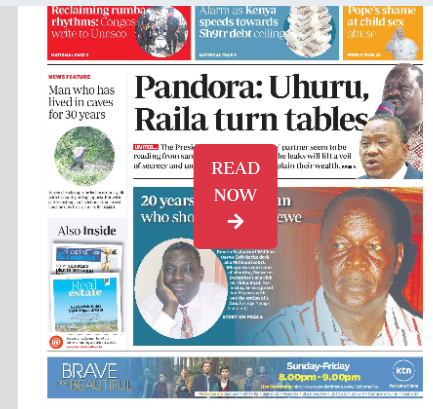 The main headline is about ODM leader Raila Odinga's inner circle which is likely to have new faces.

Both jubilee and ODM are keen on forming a coalition to support Raila's bid for presidency ahead of 2022.

In another story, United democratic Alliance party associated with the deputy president William Ruto is facing a storm over a list of 31 Officials picked recently.

The officials are supposed to run the affairs of the party which Ruto intends to use as he makes his first stab at the presidency.

It's now emerging that some disgruntled members have protested the list terming it not satisfactory.

In yet another story, the Pandora dossier has taken a new twist following revelations that there are close to 400 kenyan state Officers with offshore accounts.

While welcoming the dossier, president Uhuru had said that the exposure will help put to task some Kenyan Officials to explain the sources of their Wealth. 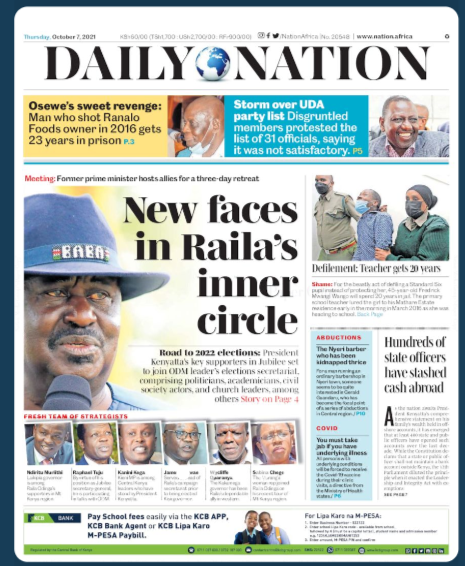 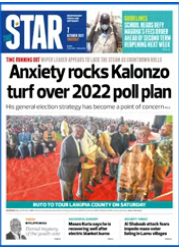 The paper Reports on how Absa bank breached lending law in a loan deal worth Ksh 18.8 billion to east African breweries limited.

The law doesn't allow banks to lend such huge amounts of money to singular clients like Absa did. 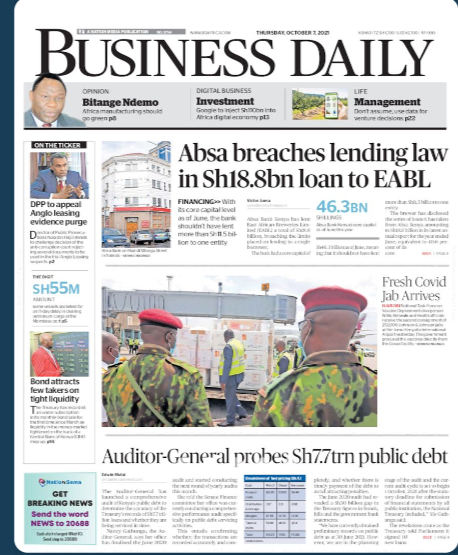 "My Baby, My Pain" Mother Shares Her Misery Immediately After Giving Birth To Her Daughter