"You Are in KKA Alone, Ukambani is in Azimio" Machakos Wiper Leaders Tell Muthama & Alfred Mutua

A section of Wiper party leaders from Machakos County have reaffirmed their support for Wiper party Kalonzo Musyoka to rejoin the Azimio la Umoja One Kenya Alliance, saying that they now support him and are rooting for Raila Odinga's presidency.

The team led by Senator Agnes Kavindu, Machakos Woman Rep Joyce Kamene and Francis Mwangangi among others, while campaigning in Yatta, said that Kalonzo had done his due diligence, and had finally gotten what he wanted for the community in Azimio, thus the residents should turn up in large numbers in August to ensure they vote for Raila.

The leaders criticized the county governor Alfred Mutua and the former Senator Johnson Muthama who are in Deputy President William Ruto's Kenya Kwanza Alliance, saying that they are going on the wrong route when the region was comfortable in Azimio. 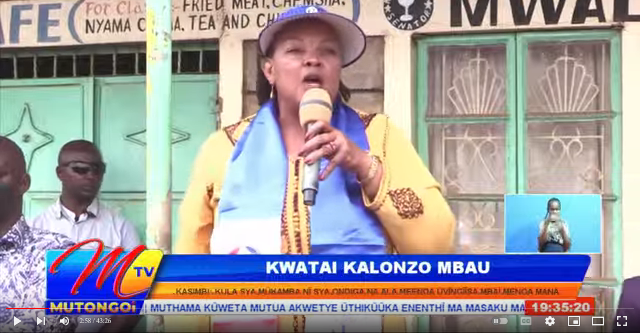 They argued that the duo and a number of other MPs joined Ruto's camp on their own as the Ukambani region is in Azimio, further urging the residents to vote for only Wiper candidates in order to give Kalonzo moe political muscle should Azimio win in August.

"They ran in to Kenya Kwanza saying that Kalonzo was not leading well, he is in Raila's side, and they are alone in the other side, and might have been send to political oblivion. Even Charity Ngilu who was opposing Kalonzo at first has stepped down," argued Kavindu.

Interesting Statistics As Ruto Beats Karua In Her Own Polling Station In Gichugu, Here Are Updates

Wednesday; Latest Preliminary Presidential Results With Only 3991 Forms 34A Remaining

Provisional Presidential Results As At 6:45 Am Today In The Morning

Babu Owino Over The Moon As He Wins Embakasi East Constituency Seat.