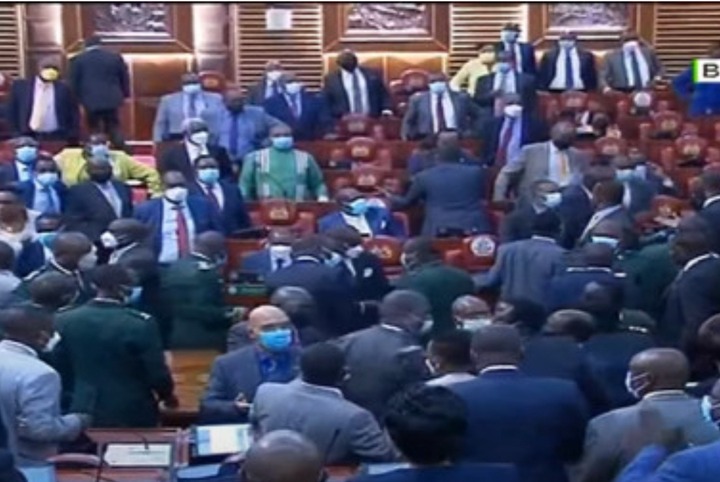 During the morning session, all hell broke loose as parliamentarians opposed to the bill took the floor in a bid to rough up Majority Leader Amos Kimunya who was moving an amendment.

Kibwezi East MP Jessica Mbalu, who was the Speaker, resorted to directing the Sergeants-at- Arms to step in and protect Kimunya so that he could finish.

That did not, however, solve issues as a push and pull characterized the session, with some MPs claiming that their cards were not working.

The afternoon session was no different either as a section of MPs rose up and roamed the House at the close of a voting round in protest of faulty voting kits.

"Honourable members, return to your seats. It has come to my attention that more than 20 panels have not worked," Christopher Omulele, the Speaker for the session, said, castigating the technical team for the woes.

"The IT people, you better get your act together, we cannot be repeating this thing forever. Honourable members, retake your seats, I am directing that we retake this vote again," Omulele was heard saying, amidst noise from the Parliamentarians.

It was only a matter of minutes before Minority Whip and Suna East legislator Junet Mohamed claimed that a section of the MPs were voting for their colleagues.

"l am aware of people who are voting tor others. Mr. Chair, we want to know how many people we have in this chamber. We want a head count," said Junet.

Nominated MP Cecily Mbarire at some point took to the floor to decry what she termed as a suspicious pattern in the tailure of the voting kits.

"It is only on this side that the voting system is not working..F the IT department has been compromised, we will not go on with this thing, Chairman," she stated.

There's nothing out of order, we shall proceed," retorted Omulele, as he dragged the chaotic session back on the horse.

Last Wednesday's special sitting was marred with chaos, name-calling and violence, forcing Omulele who was also the speaker for the day to suspend the sitting for 15 minutes.

Ultimately, Minority Leader John Mbadi was ejected from the House for five days amid accusations of injuring Sigowet Soin MP Bernard Kipsengeret on the face.

Ministry Of Education Gives New Order To Schools As Learning Sets To Resume On Thursday,18th August

Martha Koome Dealt a Blow After the High Court Made This Ruling on Presidential Election Petition.