Poll By Ruto Ally Reveals The Best Person To Fly OKA Ticket In 2022. 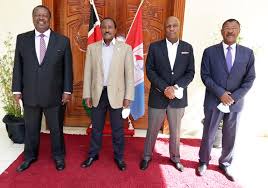 It's ten months to next year's general election and various party bigwigs are busy crisscrossing the country as they seek to galvanize Support ahead of the big day.

Although the pressure to back ODM leader Raila Odinga is still mounting, the OKA leaders are determined to field a candidate.

Mudavadi said this week that he will be asking the Mount Kenya foundation tycoons who will be meeting them on Thursday October 7 to support Him.

The MKF aims at convincing the leaders to support Raila Odinga as he makes his fifth stab at the presidency.

The statement by Mudavadi is a clear sign that OKA may end up producing a candidate to face DP William Ruto and Raila Odinga.

If this happens, they have to settle on either Musalia himself or wiper leader Kalonzo Musyoka to fly the party ticket.

Now who is the best that can force a run off between DP William Ruto and Raila Odinga in August election?

An opinion poll conducted by Bony khalwale who is an ally of DP William Ruto puts Mudavadi ahead of Moi and Kalonzo.

According to the results, Mudavadi leads with 20.3% followed by Gideon Moi at 8.6% while Kalonzo comes last with 5.2%

However, Raila Odinga beats them all in terms of who is the best person to face the deputy president William Ruto.

There has been a tag of war between Kalonzo Musyoka's Allies and those ones of Musalia Mudavadi on who should fly OKA ticket.

Leader's allied to Musyoka believes that having a big number of elected leaders will give them an advantage.

On the other hand, Mudavadi' s allies believe that they deserve the ticket because they have a huge following from Western.

Who do you think should fly OKA ticket? Feel free to share your thoughts and comments on this on our comments platform. 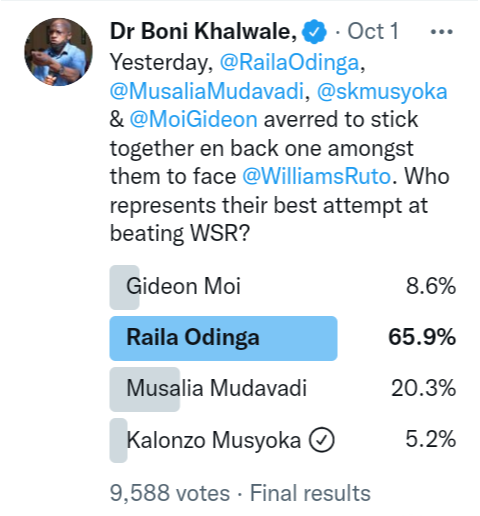 Could It Be There's Something Looming In The OKA House? (Opinion)

Zora: Chaos Erupt at the Chibale's House After Zalena Murdered This Very Important Person to Nana