"UDA Is Just A Shell" Kenyans React After Prof. Kisiangani Message To Uhuru Ahead Of 2022

Many political analysts like Herman Manyora, professor Edward Kisiangani and Mutahi Ngunyi are trying their best to remain relevant by making predictions on the 2022 polls. Some like Herman Manyora and Mutahi Ngunyi have always claimed that Ruto can't be president in 2022. They have also claimed that Raila has lost the support of many regions like Western after the creation of Regional Kingpins and this may affect his 2022 presidential ambitions.

However, analyst Herman Manyora yesterday claimed that the 2022 general elections should be suspended. He said that the government needs first to address serious issues that are affecting the nation. He said that Kenyans are not prepared for any elections and we must focus on improving the economy that is collapsing.

He claimed that he is dismayed by those who desire elections so much. He lamented saying that he is for caution. He said that for instance, Kenyans should look at IEBC, the economic situation in the country, the rising cases of Covid-19 infections and the toxic political environment. How if all these factors precipitate a crisis that hands Uhuru a free hand to rule past 2022? He asked.

His remarks made political analyst professor, Kisiangani react. He told Manyora that the reasons he is giving for recommending the postponement of 2022 elections are exactly the reasons why the elections should not be deferred. Besides, the president has no powers to postpone elections and that requires a referendum under 255.

His remarks made Kenyans react. Some claimed that referendum will be the easiest way to postpone the elections. They added that UDA is just a shell in this and has no any substance. Others said that they need a free, fair and credible elections and that Kenyans need to get rid the tyranny of numbers. However, the big question is can Kenyans have free and fair elections without election malpractices? 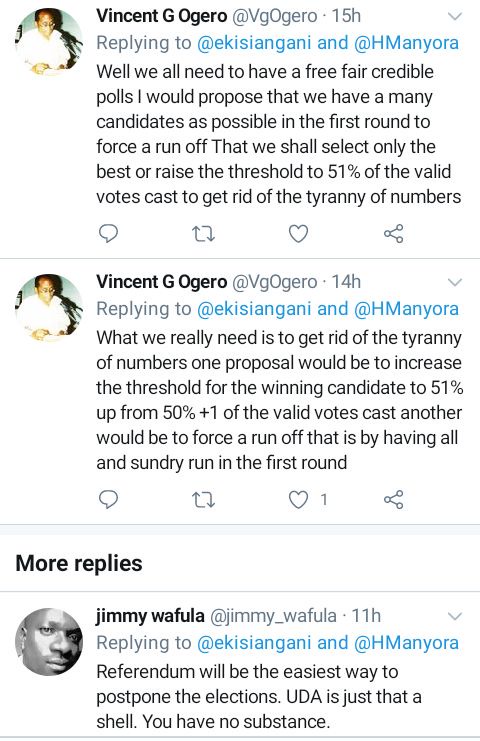 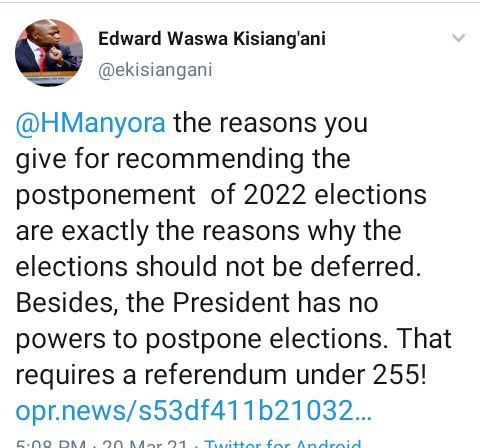 Technology I Can’t Live Without

Type Of Clothes Which Helps Hide Tummy In Plus Sized Women

Ever Heard Of Blue Java Banana, Get To Learn Much About It Here

Do You Sell These Types Of Food In Gikuyu Land? Curse Might Fall On You According To Mugo Wa Kibiru