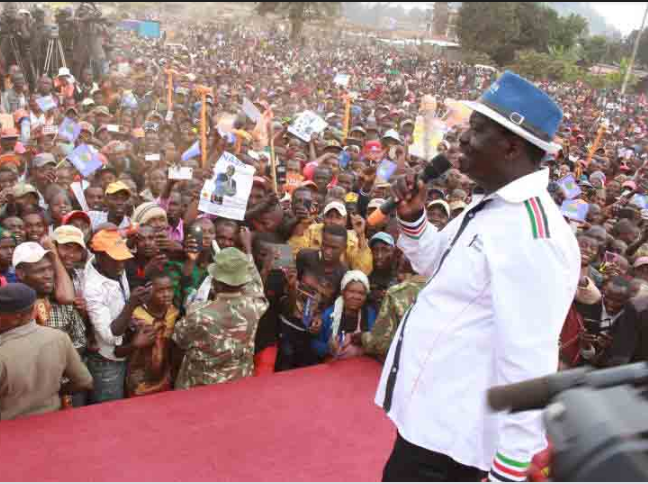 The ODM leader first stop was in Miraa growing Igembe Zone where he promised to re-open the closed markets in Somalia if he is elected president, Raila also pledged to explore Miraa market in Somaliland and Tanzania.

During stopovers at Maua, Laare, Muthare, Kianjai, Makutano and Meru town, the ODM boss promised to prioritise economic revival and the fight against disease and poverty. He said he was banking on the youths to lead revolution to usher in a new Dawn.

Today while embarking on meet people tours in the region, Odinga was accompanied by local leaders from the county led by Meru Governor Kiraitu Murungi and Agriculture Cabinet Secretary Peter Munya.

Despite the chants, the ODM boss continued to address the residents. He promised to address unemployment and empower the youths.

In the afternoon, Odinga will visit Embu County for a series of political engagements. He will meet elected leaders from the county and party officials.

Another Road Accident Along The Busy Naivasha-Nairobi Highway Claiming Lives

One Of OKA's Principals Is Raila's Spy, the alliance will fall out soon: Senator Mithika Linturi