By TomTindo (self media writer) | 14 days ago 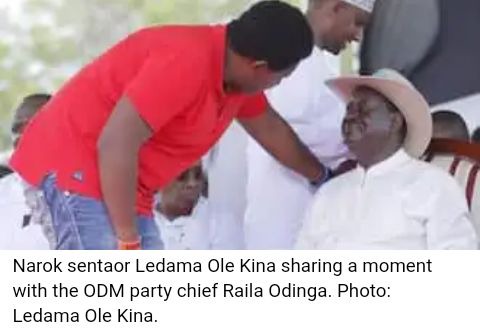 _Previously, the first_timer in the Senate had been non_committal on a Raila presidency, signalling crossing to a rival side

After openly dissenting from his political side for a while, Narok senator Ledema Ole Kina seems to have been courted back to the Raila Odinga_led ODM team.

In the recent past, the lawmaker had signalled he could defect from the opposition outfit, all indications pointing towards the Deputy President William Ruto wing.

Ledema is now back to Raila side entirely, expressing commitment to making the former prime minister ascend to power after the lapse of President Uhuru Kenyatta's second and last term.

"Raila Odinga will be the 5th President of the Republic of Kenya God willing and the handshake movement will win the majority of seats in Maasai land," he said.

He suggested he would be embarking on a vigorous campaign to see that not only Raila wins the presidency but also his side secures most of the seats, including in Narok county.

Ledema: We'll be with Raila till the end

In August, the senator strongly suggested the Maasai community would stand with Raila in his bid to lead the country.

Speaking in Waondo, Homa Bay, during the burial of the father of Senator Moses K'Ajwang and Ruaraka MP TJ K'Ajwang, the legislator promised to deliver Maa vote when the time comes.

"I want to state it categorically, we the Maa community have always supported Raila, and we will continue to support him to become president. Raila has walked with throughout his journey, we will also walk with him until he becomes president," he told the mourners.

The first_time lawmaker singled out encroachment of land as one of the challenges pastoralist communities have been grappling with in recent times.

"The Maa community depend on livestock, when you encroach into our grazing lands, you are killing our animals. We will follow Baba because he has shown the way and we are showing Maasai the direction to follow," he added.

Embu: Senator Kindiki Breaks His Silence After Raila Was Heckled By Pro-UDA Locals