By Nipashenews (self media writer) | 2 years ago 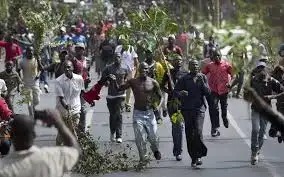 ﻿According to the residents,their region have for a long time been sidelined in terms of development.They therefore decided to hold peacefull demontrations in order to alert their leaders who seem to be enjoying a royal nap while their electorates continue suffering.

The residents took the better part of yesterday demostrating along Kemeloi-Kobujoi road in what they said it was the best weapon to their ever stubborn leaders.They blamed both the County and National governments for the problems they encounter.

They blamed the National government through their elected Aldai MP cornelly Serem for failing to tarmack the Kemeloi-Kamaindi-Kongoro road which has remained poor for decades.They were remourseful having chosen leaders whom they thought they would assist them but have turned a deaf ear to their grievances."We are farmers and we use this road to transport our produce to Serem and Kobujoi markets.During this rainy season,we sleep hungry as the road is impassable thus we cant take our produce to the market."One resident explained.

The County Government under Governor Sang was also blamed over poor medical services at Kemeloi dispensary,Lack of water,Poor market management at Kemeloi market and lack of stalls used by 'Mama Mbogas' at the market.They criticised the County government for collecting taxes during market days despite the fact that the county council does completely nothing to maintain the market.

The demontrators' grievances were received by the Nandi South Assistant County Commissioner and the Aldai Sub-County Administrator at Kobujoi who promised to pass the residents' grievances to the relevant authorities for immediate action.

However,the residents have vowed never to relent in their efforts until when their leaders become responsible in their work of serving the interest of the electorates