By SammyVincent1 (self meida writer) | 1 months

The Orange Democratic Movement party has made several allegations about electoral malpractices in the Bonchari by-election since the event started at 6am. The party which is fronting Pavel Oimeke as its official candidate in the poll has blamed state officers, its agencies and certain individuals for trying to scare off and coerce voters to choose certain candidates. The following are some of the incidents reported by the party so far; 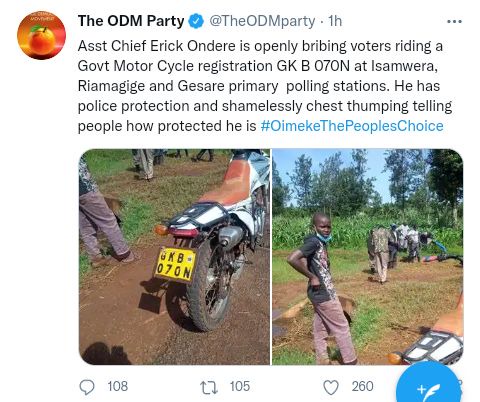 Early in the morning the Orange party took to its social media platforms to alert the public about an assistant chief named Erick Ongere from one of the sub-locations within Kisii South Sub-county who was seen bribing a section of voters in three polling stations. The chief riding a motorcycle plate number GKB 070N is said to have been committing the malpractices around Isamwera, Riamagige and Gesare polling stations. 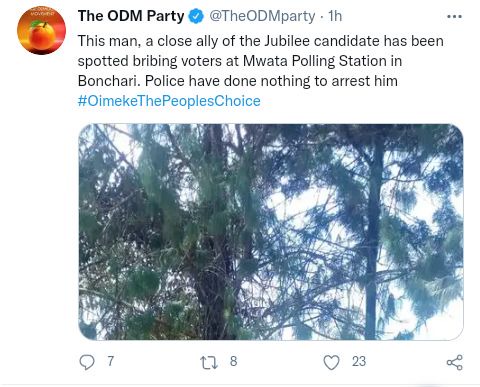 The party also reported an incident at Mwata Primary School where a man said to be a close ally of Jubilee Party's candidate Zebedee Opore was seen bribing voters. They further blamed the police for not taking any action as they are mandated by the law.

In another tweet through the official handle of the party, ODM alleged that youths loyal to the party had spotted Nyamira County Woman Representative Jerusha Momanyi and other Jubilee politicians at Kerina Polling Station and chased them away. They used the tweet to ask their supporters to be vigilant and avoid a possible rigging. 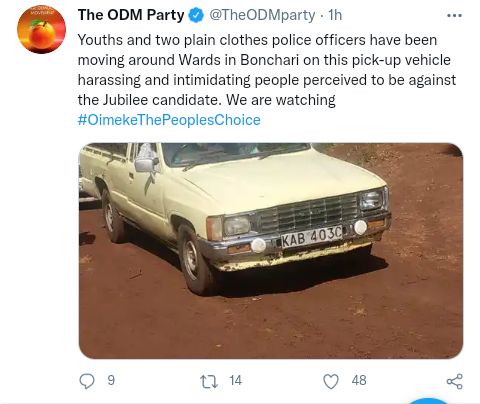 4. The Police and anti-ODM youths

The Raila Odinga party also blamed police giving security to youths seen traversing around the constituency harassing and intimidating ODM supporters. They said they were keenly watching and that Pavel Oimeke was still their preferred candidate. 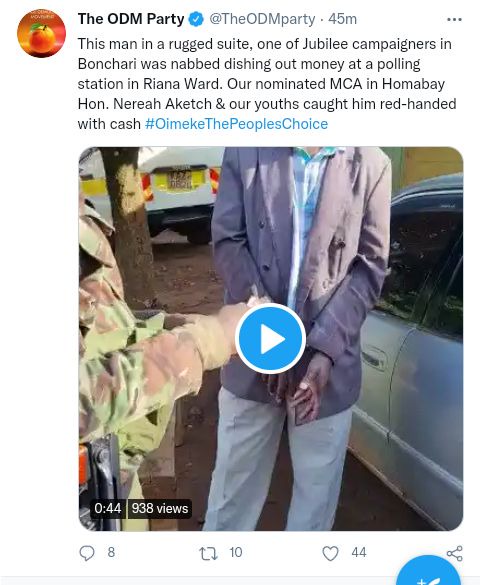 In a video posted by the party, an old man said to be a close ally of the Jubilee candidate was nabbed by the police dishing out money to voters. Nereah Aketch, an ODM nominated MCA in the neighbouring Homabay county is said to have been instrumental to the arrest. 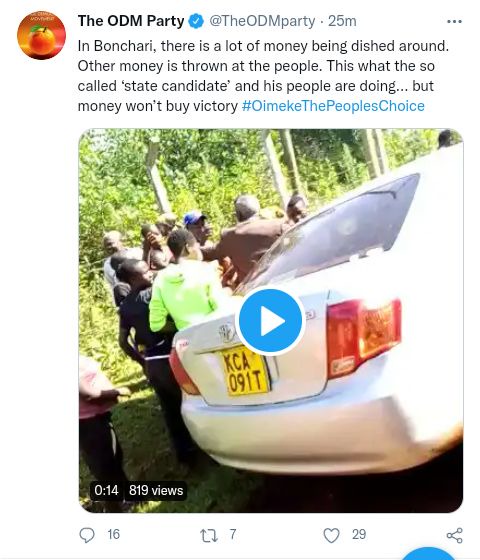 In another video shared by the party, a crowd behind a car is seen scrambling for cash which is said to originate from what the party termed as 'state candidate.' The party further said that a lot of money was on the loose to lure voters to vote for a certain candidate.

The party later on shared a letter sent to IEBC authored party director Oduor Ongwen who narrated a series of events that had transpired, which according to him amounts to malpractices and intimidation. The party said they are not satisfied with the IEBC response and action on the matters raised.

Ruto On Point, Here Are The Top 15 Talking Points From His Interview With KTN

Why So Many Cartoon Characters Are Yellow

Politician and Administration Police Officer in Trouble Over Murder of Blogger

Money or Ideas? What Really Hinders Kenyan Youths from Getting Involved in Politics

Uproar As Speculations Emerge Of Kalonzo Musyoka As Kenya's Next President