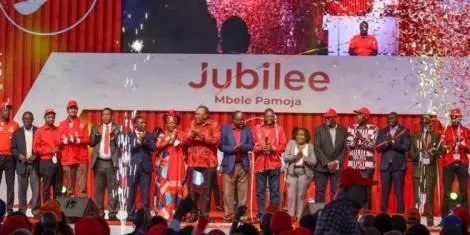 In his place, four new officials were announced to take up the post. Among the names were familiar faces of seasoned politicians such as Jimmy Angwenyi (strategy), Naomi Shaban (outreach), and Peter Mositet (programs).

However, one name stood out, Kinoti Gatobu- signaling Jubilee's confidence in assigning the 36-year-old with the task of being Deputy Party Leader in charge of party operations.

Gatobu made national headlines after he became the youngest MP elected to Parliament in 2013 at the tender age of 26. He served as the Member of Parliament for Buuri constituency.

In 2017, the youthful politician did not defend his seat, initially expressing interest to vie for the Meru Gubernatorial seat in the General Election. However, in a quick turn of events, he quit four days to the polls in favour of Kiraitu Murungi.

At the time, he defended his decision - affirming that President Uhuru Kenyatta had promised to give him a State job after the elections. One year later, Gatobu was assigned a role at the President's Delivery Unit (PDU) to serve as a director.

"We have agreed that he steps down then we will find a job for him in government. He can then get more experience and when Kiraitu and I retire, he and Ruto can continue with the work," Uhuru stated at the time.

During a previous interview with the media, he pointed out that his decision to join politics was influenced by Buuri residents who beseeched him to vie for the seat.

The alumnus of the University of Nairobi (UoN), had been working as a volunteer teacher in his village when residents petitioned him to campaign for the parliamentary seat.

He heeded their plea and since he did not have adequate finances, he run a unique campaign that was purely funded by his constituents.

Previously, he studied at Kibirichia Primary from 1993 to 2000 and soon joined Nkubu High school in 2001. In June 2014, Gatobu made headlines after President Kenyatta graced his wedding in Meru county.