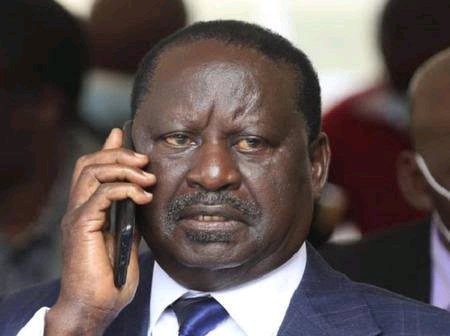 Raila Odinga's last-minute efforts to keep Kalonzo Musyoka in Azimio before naming his running mate were exposed by the Wiper party as desperate and fruitless.

It was revealed by Kalonzo Musyoka's camp that the former Prime Minister Raila Odinga had been upsetting Wiper leader Kalonzo Musyoka with an excessive number of phone calls after a slew of fruitless meetings.

Raila assumed that Mutula Kilonzo Junior was just a last-minute nuisance because of the numerous phone calls and meetings he had had, he said.

If you've been calling for negotiations all along, why have you been making so many phone calls and meetings in the last hour?" Mutula was perplexed.

Even as Kalonzo Musyoka left the Azimio La Umoja One Kenya coalition after numerous State House talks ended in disarray, it has emerged that ODM leader Raila Odinga had accompanied Gideon Moi to Kalonzo Musyoka's Karen residence to persuade him to accept the position he was being offered but the Wiper party leader was not convinced. 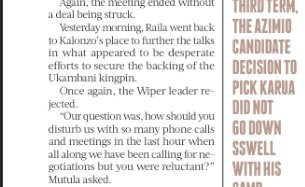 The ODM leader, Raila Odinga, returned to Kalonzo Musyoka's house early the day before yesterday to continue the negotiations, according to information. By attempting to win over the Ukambani voters, Odinga showed his desperation. That didn't deter Kalonzo, who refused to back down.