By KENYA-NEWS-NETWORK (self media writer) | 1 month ago 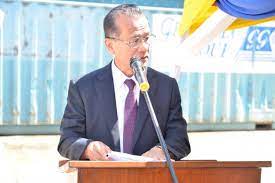 On Tuesday, December 7, President Uhuru Kenyatta was treated to some exciting entertainment at Statehouse Nairobi by the Japanese Ambassador.

Ryoichi Horie, Japan's ambassador to Kenya, surprised the Head of State with a live performance with his wife and fellow band members. 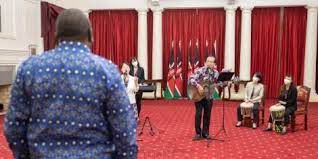 Before the performance, the ambassador spoke about his time as a diplomat in Kenya before giving the President a special farewell after serving for 42 years.

The President congratulated the departed envoy for contributing to improve Kenya-Japan bilateral ties at the meeting, which was also attended by Foreign Affairs Cabinet Secretary Raychelle Omamo and Head of Public Service Joseph Kinyua.

Several projects backed by the Japanese government had taken shape in the country during the outgoing ambassador's stay, according to Uhuru. The building of the Dongo Kundu Special Economic Zone is one of the most notable undertakings.

The ambassador gave Kenyatta a calming beat during the concert, playing one of Eric Wainaina's compositions, Daima. Uhuru was captivated by their lyrical prowess and how well they expressed Swahili phrases while singing in the video.

The Japanese ambassador said in a previous interview that he plays such songs to create bonds with Kenyans.

He stated that he requested Wainaina's permission before performing the song for Uhuru.

They also performed in front of Uhuru before the Dongo Kundu groundbreaking ceremony in 2019.

Content created and supplied by: KENYA-NEWS-NETWORK (via Opera News )