Narok Senator Ledama Olekina has urged Raila Odinga to consider putting Embakasi East Mp hon Babu Owino for one of the Parliamentary positions an award for Him, since He has been one of the loyal and most reliable politicians in the past elections.

Olekina who spoke through Twitter says that Raila should take Owino and place Him in the ongoing placing, for the Chair of Parliamentary commission of His choice, adding that He will not disappoint the whole ODM party and their supporters who have also put their eyes on to the prize. 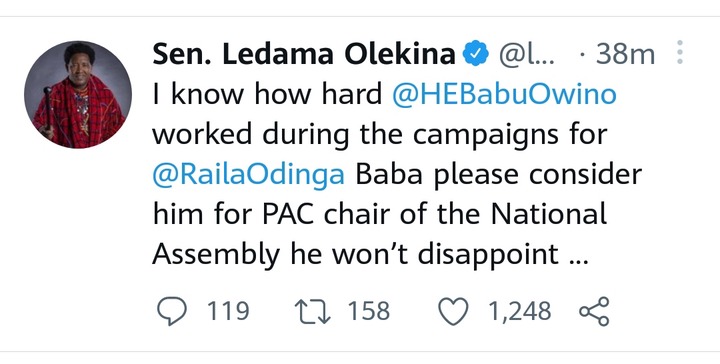 His reactions comes barely a month after the two met for discussion about their own political future, urging that they have been denied the ability to represent themselves and showcase their abilities in matters of leadership since they are young people, adding that they will have to move to an alternative faction so that they can be listened to.

Also, Odinga had instructed Olekina to be placed for a position in the senate even as the house commences it's sittings, where He will have a more bigger voice than before and also influence party decisions and critical moves, which He was limited to do in the past.

Kenyans expect the ODM Boss to respond quickly and give Kenyans an update on His final decisions on the matter, so that they can weigh on whether He values the young leadership in the Country or He is just ignorant on the whole situation, which might drain the Party and it's abilities.

The Parliament has also been busy with the approvals and acceptance of various positions for politicians across the factions, at a time when the government has decided to set their priorities.