By Linty (self media writer) | 1 month ago

He dismissed claims that the governor had been sidelined in the preparations of the event.

He stressed that all leaders were asked to nominate five people they want to attend the celebrations at Wang'uru Stadium. He accused the Kirinyaga governor of not being sincere.

"We even have a WhatsApp group forum where we exchange views on the preparation of the fete where the county is represented by ten officials. The issue of sidelining the governor should not arise," he said, adding that all other counties will be represented in the event.

He reminded Ms Waiguru that Mashujaa is a national day and the big role of the preparations is given to the National Celebrations Committee.

“Mashujaa Day is for the whole country and Kirinyaga is just a host. The county is not supposed to organise such an event and she should know that," the PS said.

Dr Kibicho said leaders should stop causing tension ahead of the Celebrations which will be presided over by President Uhuru Kenyatta on October 20.

“We should be peaceful and allow the President to address the nation. Once the celebrations are over, we can face off after the President leaves," he said.

Ms Waiguru had claimed that she had no say on who would be in the Stadium.

"I have no say at all as the host. They said the county commissioner is the one who is running the show," said Ms Waiguru.

Ms Waiguru said out of 3,000 people who will be in there, only 150 cards have been given to the county government and members of the county assembly.

"This makes me a bit uncomfortable," she added.

Kirinyaga Woman Representative Wangui Ngirici said she had no problem with the way the event is organised.

"I'm satisfied with the preparations and I'm not party to those who are making noise," she added.

Ms Wangui said President Kenyatta's government had brought a lot of development projects to the region and leaders should unite and welcome him instead of facing off over trivial issues. 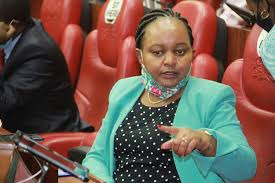 What can tell about this??