Is She The Youngest Female President In The World?

By Moselaws (self meida writer) | 11 days 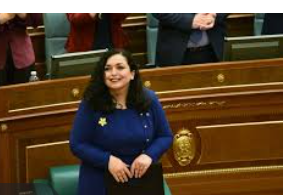 Kosovo is a state in Southeastern Europe, initially it was part of Serbia until 17th February 2008 when they unilaterally declared their independence. It's now diplomatically recognized as a sovereign state by 98 UN member states. It's landlocked and occupies an area of 10,887 km sq.

Kosovo citizens elecct their president through parliamentary system of governance. Elected members of parliament convene a session where they elect and swear in their president. It has a total of 120 members where for one to win must ganear more than two thirds of the total votes.

Kosovo has two ethnic groups, with two opposition parties. President Hashim Thaci resigned after facing crimes against humanities in an international court the Hague. Hashim led armed group during their fight for independence from Serbia.

Two days ago the parliament held a special session to elect their new president. Vjosa Osmani a female leader aged 38 years old, managed to win with a total of 71 out of total 120 votes . She has been acting as president since November 2020 when former president Hashim resigned.

Gideon Moi Suffer a Blow as What he Lacks to be President is Revealed, Two Aspirants Named Above him

ODM Top Leaders Fight In What Might Derail The BBI Process